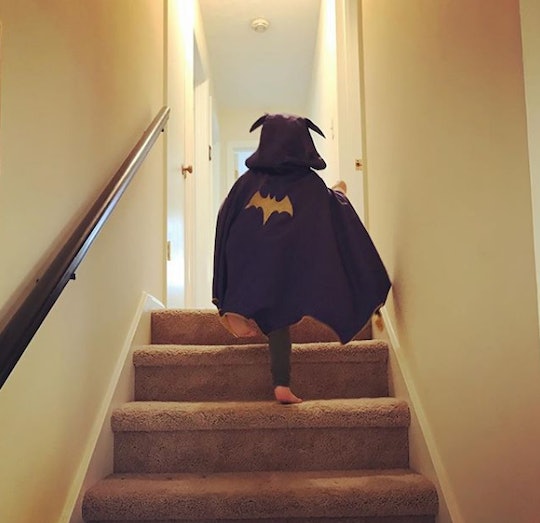 My sons absolutely love dressing up like their favorite heroes. I have a front row seat to Batman vs. Superman most days, and while the battle that ensues can be a little rough for my taste, my boys seem to be having so much fun playing dress-up with each other. But apparently, they're doing more than having fun. Experts agree that there are benefits to kids dressing like their favorite hero including building confidence, expressing creativity, practicing self-regulation, and developing empathy.

When kids dress up, they are using their imagination to create and explore a world within their mind. But it is not only the act of dressing up that impacts a child's mind, according to Dr. Gene Beresin, executive director of the Clay Center for Young Healthy Minds at Massachusetts General Hospital. "It’s not just the dressing up. Beyond that, it is identifying with and becoming the hero," he tells Romper. "This kind of identification promotes inner strength, self-reliance, and pro-social behaviors in helping others. After all, the villains that heroes — and superheroes in particular — take on threaten not just the child, but everyone they love."

Dr. Beresin explains that when young children begin to take in the challenges of the world around them, they are not yet in a place cognitively where they can successfully wade through tough issues. However, dressing like or embodying a superhero mentality can help children cope. "They are beginning to appreciate that in many situations, they feel helpless, fearful, powerless, unable to overcome many obstacles. Many are afraid of the dark, monsters, being separated from parents, or harmed by 'bad guys.' They look for ominous creatures under their beds. They worry and fear about being helpless and weak in the face of adversity," he says. "When young children engage in imaginary play, it affords them an opportunity to test these waters, to try out new behaviors, to overcome adversity, to see themselves as powerful. By identifying with superheroes, they become strong, invincible, use superpowers, aggression, and other skills to protect themselves, and ally fears."

He also suggests that the skills — which a child's hero possesses that they do not — can break through during the time when they are playing pretend. "Since superheroes are altruistic, identifying with them allows them to imagine using skills that they do not yet possess: emotional regulation (controlling their fears and anger), using aggression to help and not hurt others (an important pro-social ideal), to investigate right vs. wrong, and to use creativity to solve what they perceive as monumental problems. In addition, it provides an opportunity to practice, albeit in fantasy, impulse control and pro-social conflict resolution."

A 2011 study led by Rachel Karniol, professor of social development at Tel Aviv University in Israel examined the impulse control of children when dressed as a superhero versus dressed in their everyday attire. The study found that children wearing a Superman cape and expressing themselves as Superman were able to exert more control over their emotions and practice more patience. So, the next time your child is having a hard time waiting quietly for the snack they just demanded, you may try asking them what their favorite hero would do in the same situation. Basically, you're asking them, "What would Superman do?" and their reaction should theoretically model the self-control of that hero.

Dr. Beresin also points out that it isn't just heroes of the super variety that can create a positive impact. "Some heroes are regular, everyday people that overcome adversity. The heroes in fairy tales are great examples of this. Characters such as Elsa in the film Frozen, Ariel from The Little Mermaid, and Jack of Jack and the Beanstalk are not superheroes. but overcome adversity and conflict in positive ways," he says. I am all about encouraging my kids to have positive role models in their life and in their play. Knowing that many of their favorite characters to dress up as can fill this role is comforting.

But, there are definitely days when my kid would rather imitate The Joker than dress up as Batman. It's a little disheartening (to say the least) that my son seems to identify with a psychopath, and I do wonder if I should be concerned. Dr. Beresin says that this is not necessarily a bad thing. "While most kids want to dress up as the characters they admire and aspire to be, such as a hero, it’s normal and quite healthy for them to dress up as monsters, alligators, or any character they are afraid of. Becoming the object of their fear gives them a chance to take control of their imagined threatening characters and by doing so, control the fearful emotions and aggression they feel in response to them," he says. "Another important point is that the young child’s playing a superhero or other idealized figure is not just identifying with the hero. Kids create narratives that typically tell the story of what they fear, what challenges they face and how they might overcome them."

He suggests that parents take an active role in engaging in this type of play in order to identify and understand what struggles their child may be facing. "Closely observing the play becomes a window into the world of the child. This is what therapists do in play therapy. But understanding the fears and challenges each child is struggling with, we can help them tackle them in real life through stories, songs, and reassuring conversation," he says.

More Like This
From Captions To Gifts, These Are All The Kindergarten Graduation Ideas You Need
12 Last-Minute Vacation Spots For Memorial Day
When Is National Brother's Day?
My Nanny Showed Me How To Be A Mother