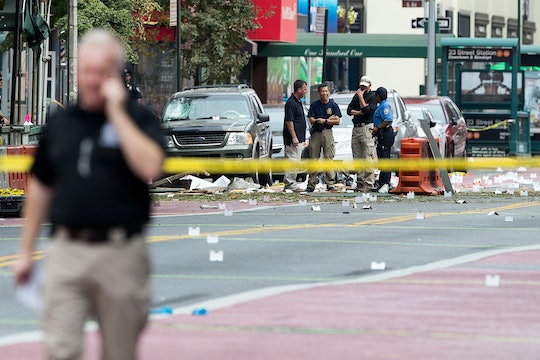 Investigators first identified Ahmad Khan Rahami as a suspect in the explosion that injured 29 people in a Manhattan neighborhood Saturday evening through a fingerprint left at the scene. He's now in police custody in connection with a series of attempted bombings throughout New York and New Jersey over the weekend, and police have other strong evidence against him: They believe surveillance footage of the alleged Chelsea attempted bomber shows him dragging a duffel bag near the site, according to CNN, as well as in the area where, four blocks away, authorities uncovered an undetonated improvised explosive device fashioned from a pressure cooker, wires, and a cellphone.

Law enforcement officers arrested the 28-year-old Afghan-born American citizen in Linden, New Jersey, Monday, after an intense manhunt that included raiding Rahami's apartment atop a chicken joint his family owns in Elizabeth, New Jersey. That's the same city where they neutralized the threat of a backpack containing bombs near a train station Sunday, and not far from Seaside Park, New Jersey, where a pipe bomb detonated at a charity run Saturday. No one was hurt, but the intention was clear: to maim, kill, and instill fear.

But Rahami's chances of carrying out that mission were all but obliterated upon his arrest after a shootout.

The gunfight commenced at around 10:30 a.m. Monday, when a Linden resident alerted authorities to the presence of a man sleeping in the doorway of a bar, The New York Times reported. Linden Police Department officials approached him and recognized him as Rahami when he lifted his head. Instead of showing his hands as instructed, the suspect then allegedly pulled out a handgun and shot an officer in the abdomen. A bulletproof vest protected the officer, and he pursued Rahami as he ran away, "indiscriminately firing his weapons at passing vehicles," Capt. James Sarnicki told the Times.

At the end of the chase, which another officer joined, Rahami had sustained multiple gunshot wounds and was apprehended.

On Sunday evening, authorities took five people into custody after a Brooklyn traffic stop in connection with the Chelsea explosion, but whether there is a link between them and Rahami has not yet been confirmed. No official news of surveillance footage or other evidence connecting anyone but Rahami to the spate of bomb incidents has yet emerged, and William Sweeney, Jr. assistant director in charge of the FBI’s New York division, told The Washington Post that authorities have uncovered "no indication that there is a [terror] cell operating in the area."

Of course, it's too early to tell exactly how many people were involved and how many suspects may still be at large. Surveillance footage is undoubtedly just one of the many tools that investigators are utilizing to determine the answer to that question and to ensure public safety.