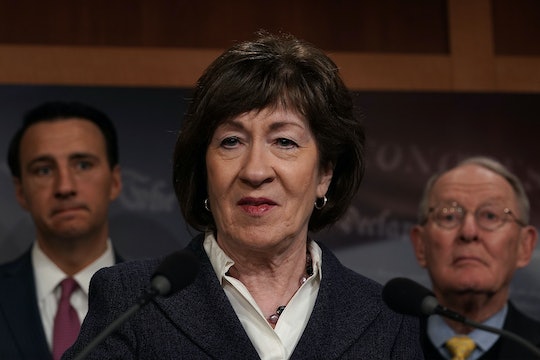 Republican Sen. Susan Collins from Maine has made it clear in the past that she's not above going against President Donald Trump or the rest of the Republican party when she doesn't agree with them. She made herself heard when it came to crucial votes for a potential Obamacare repeal back in 2017, and again when she disagreed with Trump's pick for Secretary of Education, Betsy DeVos. And it doesn't look like Collins is going to back down when it comes to the upcoming nomination for who will fill the vacant seat in the Supreme Court either. In a new interview with CNN, Collins said she won't support a SCOTUS nominee who demonstrates "hostility" toward abortion rights, which could make her vote a vital one to watch.

In the wake of Supreme Court Justice Anthony Kennedy's announcement that he plans to retire, according to NPR, President Trump is in the position of nominating his second judge to the Supreme Court. His first pick, Justice Neil Gorsuch, was confirmed to the bench last April, according to NBC News, following some pretty bitter in-fighting between Democrats and Republicans. When Trump makes his second nomination known on July 9, he will be choosing from a group of 25 possibilities that have already been vetted for him. But there's one problem: he admitted during a Fox News interview on Sunday that he has no intention of asking nominees about their stance on abortion.

This might not sit well with Sen. Collins, who supports abortion rights for women, according to Reuters. Not only did she admit during an interview on ABC's This Week on Sunday that she would like to see the president "broaden" his list of potential candidates, she also said she would not support any nominee who was hostile to the historic Roe v. Wade decision of 1973. Collins explained during her This Week interview:

A candidate for this important position who would overturn Roe v. Wade would not be acceptable to me because that would indicate an activist agenda that I don’t want to see a judge have. And that would indicate to me a failure to respect precedent of fundamental tenet of our judicial system.

Collins doubled down on that point during an interview with CNN's Jake Tapper, saying:

I would not support a nominee who demonstrated hostility to Roe v. Wade because that would mean to me that their judicial philosophy did not include a respect for established decisions, established law.

Collins and fellow moderate Republican Sen. Lisa Murkowski from Alaska are considered two of the key votes when it comes to Trump's SCOTUS nominee; they are both moderates who support abortion rights, according to The Daily Beast. So it's somewhat comforting to know that Collins is planning to take a hard line approach when it comes to protecting the Roe v. Wade ruling.

That being said, it's also a bit disconcerting to think that the Supreme Court is about to be so heavily tipped to the more conservative side if Trump's nominee is confirmed. His last nominee, Justice Neil Gorsuch, reportedly told Democratic senators during his confirmation hearings in 2017 that he believed Roe v. Wade was the "law of the land," according to The Atlantic. Which is great, but what of powerful Republican politicians who are openly anti-choice who could hold sway with SCOTUS? People like Vice President Mike Pence, who said at a luncheon in February that he believed Roe v. Wade would "end in our time," according to Refinery 29. Or President Trump himself, who said recently that abortion rights could be left up to the states "at some point," according to TIME.

Collins told CNN that she did not believe Gorsuch or fellow SCOTUS Justice John Roberts would attempt to overturn Roe v. Wade because precedent had been set, and law had been established. Here's hoping that she's right.