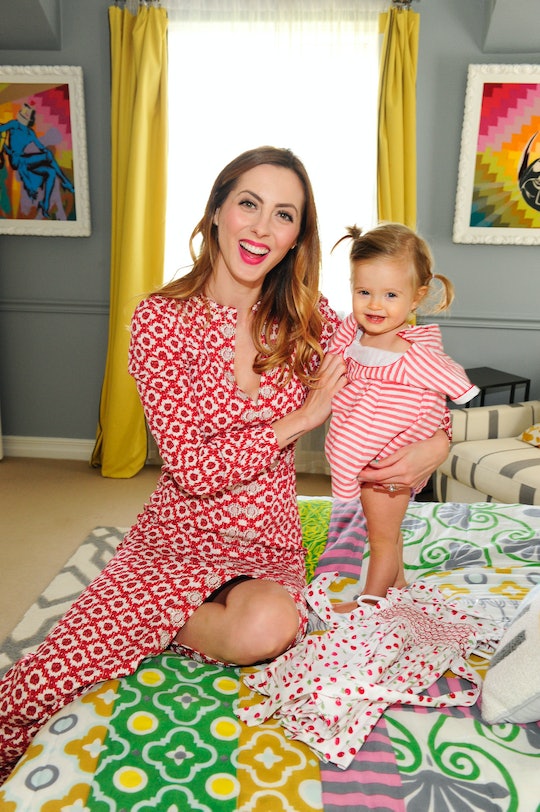 Eva Amurri Martino isn't just an actress, she's a mom with a blog, and she's got some pretty awesome perspectives on parenting. Not only does she blog about crafty ideas for making a home, and yummy food and beauty tips, but she also writes candidly about her experiences with motherhood. This last week, Susan Sarandon's daughter got real about pregnancy disappointment when she wrote about her second pregnancy (she's due this winter).

Amurri Martino writes (and Instagrams!) frequently at Happily Eva After, sharing adorable pics of her daughter, Marlow; tips for decor, style, and travel (all with kid in tow); and candid, often funny and sweet, stories from her day. Last week, she shared a heartfelt blog about how her current pregnancy has different from her previous two. Amurri Martino had a miscarriage, which she also wrote openly about, last year.

When her daughter Marlowe (who just had her second birthday Aug. 9) was born, Amurri Martino had decided late in her pregnancy that she wanted to have a home birth. The experience was positive, so when she became pregnant again, she decided that she wanted to start with that aim in mind from the beginning. But, unlike her pregnancy with Marlowe, where she had "like ten" ultrasounds, with this pregnancy (per midwives' guidelines) she's had just two. In her blog she writes:

I love ultrasounds– I find it so fun and amazing to watch my baby growing and to get a peek in to his or her little world. While I was in labor with Marlowe, I kept holding an image of her in my mind from the last ultrasound we had with her, and it really helped me visualize and see the proverbial light at the end of the tunnel during my SUPER LONG birthing experience.

This time, things are proving to be (and feel) different for Amurri Martino, and she wanted to share her feelings with her readers — many of whom are moms – so they would know they aren't alone. Especially when she had her first, and only, 3-D ultrasound last week and was hoping she'd get to see her baby boy's face — only to have things not quite go as she'd hoped: the baby was positioned with his back to the ultrasound wand. Not to be discouraged, Amurri Martino got creative about trying to coax him to turn around:

I tried everything. I ate candy from a basement vending machine! I did yoga! I walked around! I moved the chair up down and sideways! I turned on both sides! I talked to him! I sang to him! I drank cold water! We jiggled my belly with the ultrasound wand! But nothing made him move. He was lounging and cozy just where he was, and he wasn’t going to show his face to us for anything.

And when she'd tried everything she could think of, and the ultrasound tech said it just wasn't going to happen, Amurri Martino felt discouraged, worried, and had a sinking feeling in the pit of her stomach that she just couldn't shake. To top it all off, what she did find out during the ultrasound was that the baby was breech.

She headed home, thinking that her worries were just because she was scared "not to have those pictures," — which had been really helpful to her when she gave birth to Marlowe. On her way home, though, she realized that there had been something else giving her anxiety throughout her appointment, and it gave her a moment of pause:

It was exactly one year to the day of my Miscarriage. I froze. A huge wave of sadness washed over me and I finally knew why my heart and my body had been on edge all day. I didn’t know how I hadn’t remembered that date. Clearly my body had remembered, and had been holding on to anxiety and feelings about it all day long. There are so many things that happen during a pregnancy after a loss– the growth of a new life, of course, but also the acceptance of what could have been but wasn’t. The physical healing, and the emotional healing as well. Our bodies are incredible vessels for our even more incredible souls– but we are making a mistake if we think that we are in charge of them. Our bodies do so much without us asking it of them– they carry us through life and work even while our minds are restful or sleeping. Our bodies remember their own histories just as our minds do. In that moment I understood that I had hardly been giving my pregnant body enough credit, had hardly thanked it enough for all that it had gone through on that heartbreaking day a year ago– and for all that it has accomplished and endured since. I’ve had a lot of judgements for my body during this past year, and not nearly enough gratitude.

She encouraged her readers, especially those who are also expecting, to share their feelings openly and honestly. "Pregnancy is a really raw and emotional time for any woman," she wrote on Happily Eva After, and reminded them that it's okay to feel upset when things don't go as planned — but to also remember that "even more magical things might be waiting for us outside and beyond our plans…"

And when things get really overwhelming? Amurri Martino can always reach out to her mom, actress and activist Susan Sarandon.