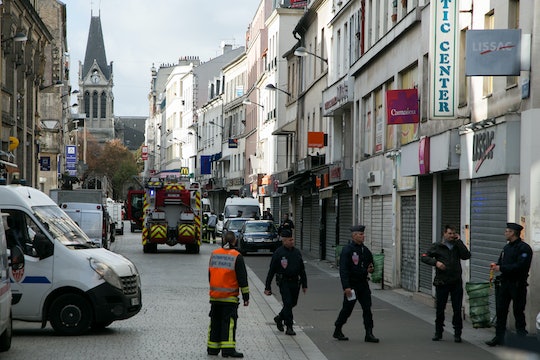 Almost six days after the terrorism struck France Nov. 13, the suspected mastermind behind the Paris attacks is dead, the Washington Post reports. According to two senior intelligence officials, Abdelhamid Abaaoud, the alleged architect of the coordinated shootings and bombings in the French capital Friday, died in a police raid early Wednesday morning, but that report has not been confirmed. When police entered an apartment in Saint-Denis just north of Paris before dawn, a woman reportedly set off a suicide bomb, killing Abaaoud and another suspect. Seven other suspects were arrested in the raid, two of whom have been hospitalized, according to CNN.

Authorities weren't certain at first that Abaaoud, a 26-year-old ISIS militant from Belgium, was among those killed. He is thought to have orchestrated the coordinated shootings and suicide bombings in Paris last week that left 129 dead and hundreds wounded.

The raid took place after phone conversations overheard by authorities indicated that one of Abaaoud's relatives might be in the area. Helicopters and heavily armed police officers reportedly arrived in Saint-Denis early Wednesday. Residents heard gunfire at 4:30 am and an explosion at 7am. Police reportedly fired 5,000 rounds of ammunition. A 7-year-old police dog, Diesel, was killed during the raid.

While the Washington Post reported that Abaaoud had been killed, the Paris prosecutor François Molins said only that he wasn't among those arrested. Human remains found in the rubble haven't been identified, Molins said.

Following the raid, French President François Hollande said it was proof that "we are at war." He continued, "What the terrorists were targeting was what France represents. This is what was attacked on the night of November 13th."

More Like This
Family Of Grandfather Killed In Highland Park Mass Shooting Say He "Saved" Their Lives
What Exactly Are Minions, Anyway ?
Megan Fox Explains Why She Asked Machine Gun Kelly If He Was Breastfed As A Baby
Barack & Michelle Obama Shared The Most Adorable Baby Photos Of Malia On Her Birthday