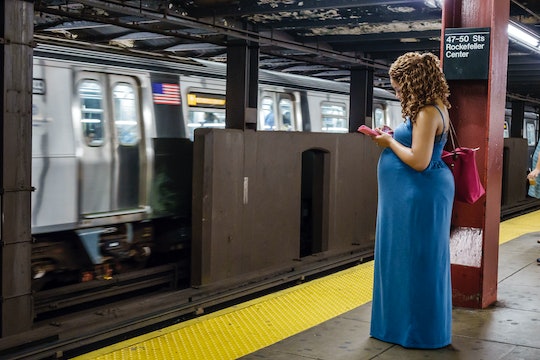 Maybe it’s crazy to you, but I took the subway to the hospital when I was in labor with my baby, and if they’d let me, I would have taken it home, too. I am a native New Yorker, I'm not a germophobe, and in pregnancy I was also a newly minted miser. What was the big deal about a subway ride? I was just not willing to pay for cabs all over town with my pregnant self. The subway was cheap and easy. So what’s it to you? Turns out, a lot.

I find it super annoying that people feel the need to comment on other people’s life choices in general. And when your body is a billboard proclaiming that your life’s about to change, people do it a million times more, which meant I spent the better part of my pregnancy super annoyed. Comments like you look like you’re ready to pop and wow, you’re huge! were the least of it. I was constantly fielding questions from people I barely knew or didn’t know at all.

The worst was when people insisted on touching me. It happened so many times, even from people I knew and liked, that I eventually gave up all rights to my privacy, my personal space, and my body.

They offered recommendations for her name (she already had one), advice about how much I should eat and for how many, and about what I should eat so that I didn’t end up raising a picky eater. Some said it was not safe to exercise, others said I absolutely must keep moving my body regularly. They told me that I should sleep while I could because once the baby was born, everyone knows that’s it for sleep; and that my life as I knew it was over so if my body could still tolerate it, my husband and I should have as much sex now as we could, oh, and I shouldn’t worry because that doesn’t hurt the baby. I got interrogated about my marriage, my finances, my politics, my feelings on public school versus private, and more. It drove me crazy. The worst was when people insisted on touching me. It happened so many times, even from people I knew and liked, that I eventually gave up all rights to my privacy, my personal space, and my body. I answered their stupid questions as politely as I knew how while divulging as little personal information as possible, thanked them for their useless advice, and I even usually let them feel the baby kick.

Despite that, I wasn’t done being mad that people — the same strangers who noticed my belly from miles away to offer me unsolicited advice about my body and my child and my life — averted their eyes rather than offer me a seat on the subway during my pregnancy. I knew they were tired. But so was I, and I felt it that offering a pregnant person a seat was not an antiquated chivalrous move but rather, simple common courtesy. Clearly the majority of the New York City commuting public did not feel the same way. I held onto the bar above my head and swung my belly in people’s faces to try to prove my point. In response, they disappeared behind their newspaper, hunched over their phones, or simply closed their eyes, thus effectively proving theirs. Most of the time nobody offered, and when they did, it was almost always another woman. There were times when other pregnant women would offer me their seat, insisting I was further along and therefore clearly more in need, both of us irritated that nobody within earshot of us in this overcrowded subway car would step in and offer their seat instead. Eventually I gave up and accepted that I was going to stand most of the time. I had a long commute from Brooklyn to my job on the Upper East Side that took me an hour and a half each way. When I wasn’t listening to hypnotherapy affirmations or pregnancy podcasts, I read a lot — when I had a seat. When I didn’t, I listened to loud, distracting, energizing music so I could tolerate staying on my swollen feet for that long.

When my baby was getting ready to come, I stepped up my activity game rather than the other way around. My midwife suggested I start going to acupuncture to “move things along,” and my doula and others said long walks were great to get gravity to do its thing. I found a community acupuncture place about four miles from our apartment and in the week before my due date, I walked there and back every single day. It was cold. It was February. But there was no direct way to get there by subway and the Brooklyn buses still mystified me, so I bundled up and I walked.

We trudged back to the subway — where my husband pushed my enormous self all the way up the stairs to the platform singing the Rocky theme song to me — and over to that same local hospital and its same emergency room, where I was once again checked and pronounced to be 'a fingertip,' and sent back home.

The baby dropped, but active labor still evaded me. One night I woke up in a puddle, convinced my water had broken, but I had no contractions. I was supposed to deliver my baby in a hospital in lower Manhattan, but when I called my midwife, she sent me to the hospital nearest me in Brooklyn. I felt fine, so we got on the F train and headed in. Within minutes of being checked we were back on the train going home. It wasn’t my water breaking, they said. It must have been pee. I was embarrassed and tired and no closer to having my baby.

Two days later, still no active labor. The contractions had started again, but they’d slow every time I went for a walk or got in a warm bath. Now the doula was suggesting beer and sex. And castor oil. By this time, I was 39 weeks and 2 days and I was really, really ready to get this baby out of me. I was willing, but not castor oil willing. We turned to the television instead, and binge watched an entire season of Lost in a day. I ate lots of takeout. My midwife was getting worried. She sent me back to the hospital, so we trudged back to the subway — where my husband pushed my enormous self all the way up the stairs to the platform singing the Rocky theme song to me — and over to that same local hospital and its same emergency room, where I was once again checked and pronounced to be “a fingertip,” and sent back home. These rides were uneventful because they were late at night and we had rows of seats to ourselves. I spread out. I put my feet up. I glared at the two or three other commuters, ready for commentary from the peanut gallery. But none came.

At home, the contractions intensified but remained erratic. My doula came to check on me, and again recommended walking when I was out and relaxing in a warm bath when I was home. I did both, and they soothed me but slowed the contractions. After two days of this, I was running out of steam. My midwife sent me out again, this time not to the hospital but to an OB practice down the street from it, where she had use of an office. We took the subway once again, and this time it was the middle of the afternoon and the train was crowded. My husband was with me. Loudly, he asked no one in particular who would give up their seat for his wife. He pointed to my midsection. She’s in labor, he added. There were cries of alarm and people scattered. I sat down in a heap, not caring what anyone thought. I was tired. But this was not the end. My midwife used what looked like a crochet hook on me to move my cervix around and induce labor. She suggested we take a car service home to get our things and head to the hospital. Our hospital. She’d meet us there in a few hours. A few hours, I thought. That’s plenty of time! I insisted we walk back to the subway. I was hungry again and there was a really great bagel shop on the way. We stopped and got toasted everything bagels heaped with tofu cream cheese and tomato. I ate two. What a sight I must have been on the F train at just shy of 40 weeks pregnant, stuffing my face. Mercifully, no one said anything.

'I’ll call you a cab,' the attending nurse said sweetly. Oh no, we’ll take the train, I assured her.

Back at home, we re-packed our bag and I waited to see what would happen. It didn’t feel like much had changed, even after the hook. Determined to have this baby already, we decided to do what the midwife said and head into the city. It was rush hour now, an early evening on a Friday in February. My husband convinced me that if there ever were a time to take a cab instead of the train, it was now. I agreed, mostly because I didn’t think I could face the three flights of stairs to the platform again no matter how adorably he sang the Rocky theme song. Less than 36 hours later, we had a baby and a car seat and we were on our way home. “I’ll call you a cab,” the attending nurse said sweetly. Oh no, we’ll take the train, I assured her. We don’t have that far to go, we’ll be fine. She looked at me like I had spoken to her in another language and explained to me the way one explains something to a small child that she wasn’t allowed to let me leave with the baby in any other way than strapped into the car seat, in a car.

Four days later when the baby had her first pediatrician visit, we took the subway to get there. She'd already been outside, so what was the big deal? On the train, I stood and I held the pole with one hand. I had the other around my baby, bundled in a Moby wrap under my coat. That's when I got my first dose of a new cropping of unsolicited commentary and advice. The subway is so dirty (I know), don’t I use hand sanitizer (of course), the baby is too young and will pick up diseases from the pole you're touching (she’s asleep under 12 layers of fabric, honestly how can you even see her?), and my favorite: you should know better. How could I know anything? I had a four-day-old baby and the truth was I had no idea what I was doing as a parent, but the subway had been good enough for me all my life, and I knew it was going to be good enough for my kid, no matter what anyone said.