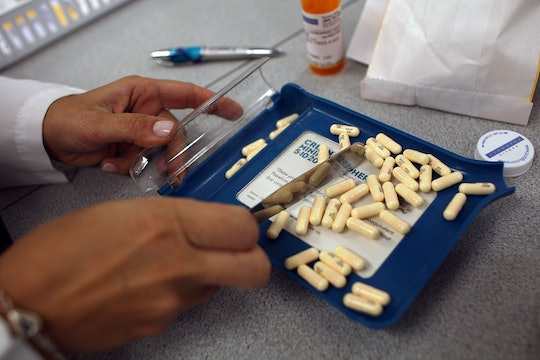 Antibiotics During Pregnancy Could Affect Kids Later On

There are few things worse than getting ill when you're pregnant. Because you're already tired, already feeling a little foreign in your own body. You seriously don't need to get sick. And what do you do if you end up with a bad cold? Take antibiotics? Unfortunately, that might not be the safest idea. A new study found that that taking antibiotics during pregnancy, or while breastfeeding, could potentially affect your kids down the road.

A new study by the McMaster Brain and Body Institute in Canada, recently published in the Nature Communications journal, looked at the way low-dose penicillin affected pregnant and lactating mice. The study looked at the impact these antibiotics had on the behavior of babies, and discovered an uptick in aggression and social interactions with others. Interestingly, Today's Parent reported the antibiotics also appeared to bring on an unusual decrease in anxiety, which caused the baby mice to take on dangerous situations they might otherwise avoid. This isn't the first time scientists have looked at the possible way antibiotics could affect pregnancy or breastfeeding babies; previous research conducted in 2014 by NYU Langone Medical Center indicated that taking antibiotics during pregnancy or while breastfeeding may lead to increased likelihood of obesity in children and a higher chance of developing metabolic abnormalities.

Of course, these studies were conducted on mice, and mice are not human beings. To better translate the affect of taking antibiotics during pregnancy or while breastfeeding, researchers gave the mice a comparable dose of penicillin to the amount a pregnant woman would take. The mice were given the antibiotics during their last week of pregnancy until the babies were weaned. The results found that the mice whose mothers had only received penicillin suffered from stomach health issues, aggressive behavior, and a dramatic drop in social interactions. The mice whose mothers also received probiotics did see a reduction in these same issues, according to the same report by Today's Parent. The scientists also gave some of the mice an antibiotic during the morning and a probiotic in the afternoon.

There are almost no babies in North America that haven't received a course of antibiotics in their first year of life. In this paper, we report low-dose penicillin taken late in pregnancy and in early life of mice offspring, changes behaviour and the balance of microbes in the gut. While these studies have been performed in mice, they point to popular increasing concerns about the long-term effects of antibiotics. Furthermore, our results suggest that a probiotic might be effective in preventing the detrimental effects of the penicillin.

While many pregnant and breastfeeding mothers may opt to avoid antibiotics during their pregnancy, Bienenstock also noted in Nature Communications that some meat and dairy products still contain low doses of penicillin.

If mothers are passing along the effects of these drugs to their as yet unborn children, this raises further questions about the long-term effects of our society's consumption of antibiotics.

Hopefully, this new research will offer mothers the opportunity to make more informed choices during their pregnancy, though it's important to note that it's just one study, and more studies are definitely needed before expectant mothers or breastfeeding women feel any need to worry.