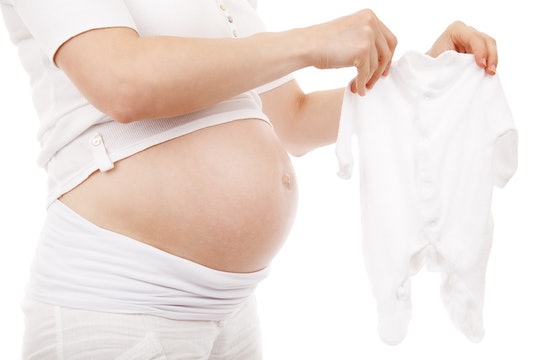 Taking Antidepressants While Pregnant Might Make Kids More Prone To Depression, & Here's What You Need To Know

Earlier this week, the Journal of the American Academy of Child & Adolescent Psychiatry released its findings in a large scale antidepressant study, and the results were disconcerting — at best. According to the study, kids whose mothers took antidepressants while pregnant may be more prone to depression. In fact, according to the study they are “more than four times as likely to become depressed by age 15, compared...[to their peers,] whose mothers had psychiatric disorders but didn’t take the medication during pregnancy,” according to the Wall Street Journal. However, moms-to-be shouldn’t stop taking their medication just yet. This data is preliminary research data, which means it is research that contains information which “needs to be verified and its results are not conclusive,” according to Ask.com. So, here is what you need to know.

This study followed nearly 65,000 women and their children for 14 years. It is one of very few studies to follow children for such a long time, and it is one of a handful of studies that followed the children into their adolescent years. While all of the women in this study had (or have) depression or anxiety disorders, they were also all given a choice: they could continue their medication during pregnancy or stop it. Their choices gave researchers a control group and a varible group.

The "bad news" is that this is the first study to link certain antidepressant — SSRI (selective serotonin reuptake inhibitors) — exposure in utero to a later risk of depression. However, correlation does not imply causation. (For example, causation is when one action or occurrence directly causes another, i.e smoking causes lung cancer, and correlation is when one action occurs with another but is not necessarily the cause, i.e. smoking is correlated with high alcohol consumption, according to Stats.org) The “good news” was that the study found no association between the use of (SSRIs) during pregnancy and the development of autism, ADHD, or anxiety in children.

If all of this sounds alarming, it is. Heli Malm, an obstetrician at Helsinki University Hospital in Finland and the lead author of the study, noted the results are “worrisome.” However, she also explained that she expects the number of children diagnosed with depression will increase, as only the oldest children in the study are at an age when mood disorders tend to arise, according to The Wall Street Journal. That said, Malm was quick to point out these findings should be viewed cautiously, as the results are preliminary.

What’s more, there is an important variable being underplayed here: genetics. It is now widely accepted that depression has a genetic component, and, according to Healthline, as many as 40 percent of those individuals struggling with depression can trace their illness to a genetic link. While this study did state all of the mothers had “psychiatric disorders,” meaning everyone in this study was genetically predisposed, how much weight can be placed on these results, or, what role did genetics play and what role did pills and prescriptions play?

[While it is true] one of the biggest drivers of childhood depression is maternal depression. There was a lot of potential time for these kids to be exposed to their mothers’ depression [not only in-utero, but beyond].

Furthermore, history proves these types of studies are problematic and their “results” can vary greatly. For example, the research looking at the longer-term effects of SSRIs on children exposed in utero is decidedly mixed, according to The Wall Street Journal. Some studies have found an increased risk of autism and ADHD, while other studies, like this one, have found no association.

So, while I appreciate the intention of this study, I implore all women — pregnant or not — to take its findings with a grain of salt, because only you and your doctor should decide what is right for your situation and your life, and thus the life of your future little one.

More Like This
Dr. Jill Biden Just Delivered Some Frank, But Powerful, Advice On Motherhood
Reddit Applauds Mom Of Five Who Stood Her Ground & Left Sleeping Dad Behind
9 Reasons Why Some Women Can't Breastfeed
Banana Boat Sunscreen Has Recalled Products That Were Found To Contain Benzene