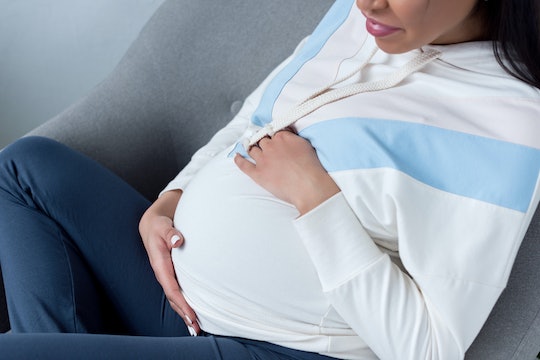 Pregnant women have long been advised to take folic acid supplements during their pregnancy to help prevent potential birth defects in their baby's spinal cord and brain. In fact, the United States has been fortifying grain products with folic acid since 1998 to help reduce the possibility of spina bifida, the one illness that folic acid seemed to prevent. Now it seems the vitamin might be preventing even more significant illnesses. According to new research, taking folic acid during pregnancy might reduce your child's risk of mental illness later in life.

As of Jan. 1, 1998, the United States has been fortifying common grain products like enriched bread, flour, pasta, cornmeal, and rice with folic acid, a man-made form of vitamin B (also called folate) that helps your baby's neural tube develop properly. Lead author of the recent study, Dr. Joshua Roffman of the Massachusetts General Hospital Department of Psychiatry, worked with a team of researchers to look at the brain scans of school-aged children born before 1998 and after 1998 to see what sort of effect the folic acid might have on their brain development, as the Daily Mail reported.

The results were significant, as published in JAMA Psychiatry on Tuesday. Researchers found that folic acid helped to prevent thinning of the cerebral cortex that has been linked to severe mental illnesses like schizophrenia and autism.

What they found was that children who had been exposed to folic acid while in utero had a significantly reduced risk of developing mental illness because the thinning of their cerebral cortex was significantly delayed. The thinning of the cerebral cortex is a natural growth process of the brain, helping to get rid of excess build-up between neurons, according to the CDC. But the acceleration of that thinning has been linked to mental illnesses like schizophrenia, autism, and psychosis, according to Neuroscience News.

As Dr. Roffman explained to the Daily Mail:

The illnesses we are trying to prevent like autism and schizophrenia are really devastating and chronic, and we don't know how to cure them. Trying to work out how to prevent them has been something of an elusive task, but previous studies really point to the womb as an important place to start. The result were what we hoped to see. Children with autism and schizophrenia have an early and accelerated thinning of the cerebral cortex. What we observed was the opposite. They had a delayed pattern of thinning in these regions.

Dr. Roffman and his fellow researchers hope that the results of this study will encourage more women to take folic acid supplements throughout their pregnancies. They also hope to share these results with other countries like the United Kingdom where they have not implemented the fortification of folic acid in grains, as he explained to the Daily Mail

If there's a solid chance that taking folic acid during pregnancy would prevent or reduce the risk of mental illness in your children, it seems that expectant moms would make an effort to make this supplemental vitamin a part of their daily regimen.

More Like This
Yes, It’s Possible To Get Pregnant If You Have An IUD
Pelvic Pain During Pregnancy: What Causes It & How To Deal With It
Parents Are Missing Work At Record-Breaking Rates To Take Care Of Sick Kids
40 Fantastical Boy Names That Start With “F”