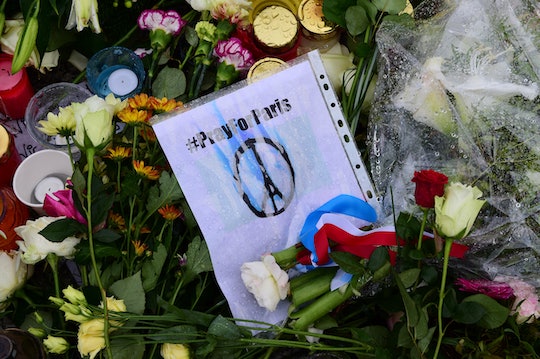 Talking About Paris Isn't Wrong Or Hypocritical, It's Important

I woke up this past Saturday morning to a text from my sister. She told me to turn on the news; there had been an attack in Paris. My heart immediately fell into my stomach. Not just one — but several attacks had taken place. I could hear my neighbor's television blaring through the walls, and all at once it hit me: we were watching in sync, both listening to the same heartbreaking news. In the aftermath, some advised talking about Paris was wrong. I think just the opposite. I think we should talk about Paris. Loudly. And often.

As I stood, mouth agape at the horror unfolding on my TV screen, I was suddenly 17 again, at home, in the United States, standing in front of the television on September 11, 2001. I had turned it on just in time to see the second plane hit the Twin Towers. The fear, the terror, the utter shock — it came rushing back, hitting like a wave. Instantly I was 17 again, watching my home, my nation, the one place I believed was the very safest place on earth, literally crumbled and implode. Now, 14 years later, I watched as fear uncoiled itself again, stretching out over the city of Paris, swallowing it whole.

These attacks, they aren't just on people or on buildings; they are on our universal philosophy of liberty, our deep-held beliefs of freedom, and our fight to guarantee and ensure justice for all. They are the same beliefs that Americans have held and fought for 239 years – and the same beliefs that one of our oldest allies, France, has stood in allegiance with us on. In a speech shortly after the devastating attack, President Obama stood in front of reporters, echoing what so many Americans already know: that the United States stands with you.

We are reminded in times of tragedy that the the bonds of liberté, egalité, and fraternité are not only values that the French people care so deeply about, they are values we share, and those values are going to endure far beyond any act of terrorism or the hateful vision of those who perpetrated the crimes this evening.

Yet not even days after the attack, the virtual finger-wagging and reprimanding of our sympathy and empathy for the people of Paris took social media by storm. I am supposed feel guilty because I changed my profile picture to the Paris flag. I am told that I am unsympathetic to what happened in Beirut nearly two days prior. Where is the hashtag for Lebanon? people wonder. Why doesn't my status say #PrayForBeirut? I get that, I truly understand that, and believe it or not my prayers for world peace are not exclusive to Paris.

But I would be remiss — we all would be remiss — if we did not take notice of of Paris, because Paris did happened. It's happening. And it is not hypocritical to care more about Paris than Beirut. It is not hypocritical to care at all. Having emotional ties to a place does not make you a bad person. Caring about Paris and the lives lost does not make you a hypocrite. It is OK to mourn Paris, and it is OK to allow that mourning to manifest across your Facebook and your respective social media feeds. It is OK to let that sadness pour out in articles and in tweets.

Pausing to commemorate what happened doesn't make me or anyone a hypocrite. It is what makes us human.

As an American expat living in Italy, I know all too well what will happen in the coming days. They will be scary. Quiet. Dark. Eerily quiet. Too quiet. But not calm. How could this happen? How did this happen? Why? In the weeks after 9/11, I felt like I was living out a dooms-day movie. Those moments, trickling by slowly, hour by hour, minute by minute; they felt like one impossibly long silence. What was there to say? What could you say? All there was was why?

The safety I once felt in a pre-9/11 world was replaced by fear. But amidst all the terror, there was unity. Beautiful, shining, moments. Not only did Americans stand together as best we could, but the world joined us. Yes, there are undoubtedly moments where America and the world got it wrong (and there are still those moments). No one is ignoring that or doubting that or trying to pretend that it did not happened. But to this day, I cannot say I've ever seen or felt anything like the expression of humanity in the days and weeks after New York crumbled. We rose. We hoped. We believed. We stood together when it would have been so easy to fray and tear at the seams. We held each other up when it would have been easier to topple over one another on our way out.

Horror may have swallowed us up, but hope spit us back out.

It felt like the world stood with us in mourning.

And now we have a chance to do that for France.

What happens in the Middle East does not go unnoticed. There are reminders of it everywhere, everyday. In Paris, in Kenya, in Beirut, in Baghdad. In places of the world where terror has found a home. In Paris. In America. Because of that, I will not feel guilty about my publicized sympathy for France. I will not feel guilty, because my country has also been where France is now. And I believe it's our duty to stand up for each other.