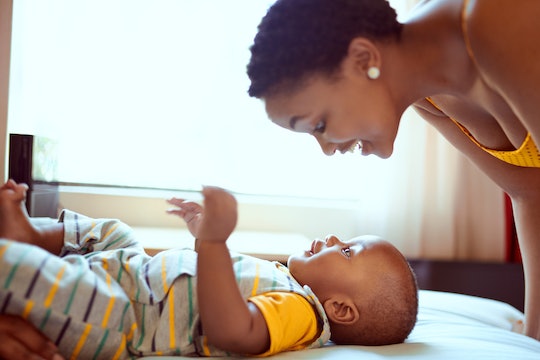 Most parents talk to their babies a little differently than they would with anyone else — and there's actually a word for it. It's called "parentese," and it's apparently quite beneficial for your little one. According to a new study, researchers found that when parents talked to their babies in "parentese" it could help them develop their language and social skills at an accelerated rate.

A new study from the Institute for Learning & Brain Sciences at the University of Washington published this week in the Proceedings of the National Academy of Sciences journal looked at whether or not coaching parents to speak to their babies using "parentese" would help to engage their little ones in conversation. "Parentese," as lead author of the study and I-Labs co-director Patricia Kuhl told CNN, is defined by three specific "characteristics" of speech style.

"One of them is that it has a higher overall pitch, about an octave higher," Kuhl told CNN. "Another is that intonation contours are very curvy; the highs are higher, the lows are lower, and it sounds excited and happy." The third characteristic is especially important; it's when parents slow their speech down in an effort to give their little one space to engage in the social interaction, with pauses between words. This helps to ignite babies' "social brains," which is vitally important as they develop their speech.

For instance, if your little one is reacting to your voice you could say something like, "Does my baby like the sound of my voice? You like to talk to me, don't you?" Leaving room for the baby to respond with coos and babbling.

Researchers looked at the long-term outcomes from a previous study from 2018, which was also conducted by the University of Washington. In the first study, researchers observed families with their 6-month-old babies, 48 of whom spoke to their children after being coached to use "parentese" and some who spoke to them as they would another adult. Coaching sessions were updated at regular intervals in the interim 12 months using a device to help them stay on track.

The new study, carried out one year after the first, found that the 18-month-old children whose parents spoke to them using "parentese" had better language retention and stronger parent-child conversations on the whole. In the cases where the parents had received coaching, the children were able to produce actual words much quicker. Regular, everyday words like "banana" and "milk," the research found.

And, understandably, researchers found that parents were more than willing to speak "parentese" with their babies if it would help their development. "We had no idea that parents would respond so positively to information about how their own speech to the child affects the child's language development," University of Washington assistant professor of linguistics Naja Ferjan Ramírez said of the new research. "Parent coaching gave parents a measurement tool, almost like a Fitbit for parentese, and it worked."

Essentially, each parent was given a lightweight recorder for the child to wear during weekend coaching sessions at 6, 10, 14, and 18 months of age. This recorded all conversations between parents and babies so the researchers could measure the infant's response to various ways the parent spoke.

It should be noted that "parentese" is not like baby talk, which typically uses nonsense or made-up words to talk to children. With "parentese," you still use proper grammar and words that make sense. All of the parents who took part in the study started out using "parentese" naturally in varying degrees of regularity, but it appears that the children whose parents made an active choice to use this form of communication with them developed the most. So the next time you might feel embarrassed for talking to your little one in a sing-song voice with lots of pauses... don't. You're doing them a favor.