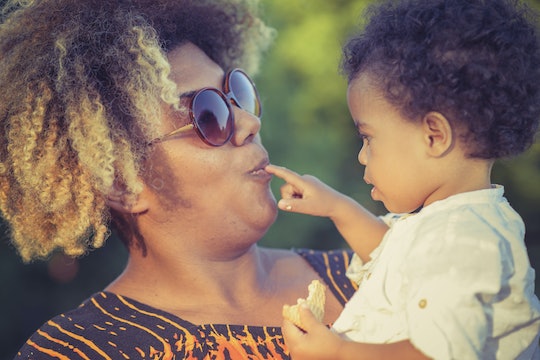 Talking To Your Baby Might Make Them Smarter Later In Life, According To New Research

I prefer conversations with toddlers over adults pretty much every day of the week. First of all, I really like it when people ask me questions and want to know the answer, but also I feel like toddlers are generally just funnier than anyone else in the world. When my sons were toddlers I pretty much just hung out with them always, because they cracked me up. Turns out, I apparently made a good parenting decision for once — science says so. In fact, according to a new study, talking to your baby might make them smarter, so I should really have four little Einsteins running around. I pretty much never shut up.

A team of researchers lead by Jill Gilkerson, director of child language research at the LENA Foundation in Boulder, Colorado, looked at the effect talking to your baby might help them to succeed in middle school, as NBC News affiliate 14 News reported. In 2006, researchers recruited 150 families in the Denver area with children between the ages of 2 and 36 months old to record their family interactions, according to HealthDay. The team used special software to analyze these interactions for a 12-hour period once a month for six months.

This software analyzed adult words, child responses, and conversations going back and forth between the adult and children, according to the study, which was published in the Journal of Pediatrics. These families were brought back when the kids were between the ages of 9 to 14 to see whether or not talking to toddlers had any effect on their performance in middle school by testing their language and thinking skills.

According to Gilkerson, the children who had experienced more back-and-forth conversations with their parents at the crucial ages of 18 to 24 months old scored higher on vocabulary and thinking tests.

"This data supports the hypothesis that early talk and interaction, particularly during the relatively narrow developmental window of 18 to 24 months of age, can be used to predict school-age language and cognitive outcomes," as Gilkerson explained to 14 News.

While most parents probably already knew that talking to your kids helps them later in life, this study looked specifically at back-and-forth conversations with toddlers. The type of conversation when the child has a chance to engage with the adult, like when you're reading a bedtime story and your kid has the chance to ask or answer questions.

According to ABC News, children who were given ample opportunity to engage in loads of back-and-forth conversations at a young age scored between 14 to 27 percent higher on IQ and vocabulary cognition tests than children who were not given the same opportunity. Pediatricians Dr. Alan Mendelsohn and Dr. Perri Klass, who provided commentary for the study published on Monday, explained to ABC News:

Programs seeking to foster language skills in young children should pay careful attention...promotion of language-rich and emotionally positive interactions should be the goal, with play and reading aloud offering contexts for parents to provide not only enriched vocabulary, but also...enriched interactions.

Lead author of the study Gilkerson noted to HealthDay that the age of 18 to 24 months was the most pivotal predictor for engaging in meaningful conversations with their parents. "Parents need to be aware of the importance of interacting with children who are very young and not necessarily even talking. The more interaction, the better," she explained to the news outlet.

This makes sense, since 18 to 24 months tends to be the time when children are meeting a lot of crucial developmental milestones, especially with new language skills, according to What To Expect. The trick is to make sure your kids have a chance to respond and feel heard in these conversations, not just to talk at them.

Fortunately, kids who are 18 to 24 months are hugely entertaining. So hopefully hanging out with them, reading a book, and answering their weird questions won't feel like too much of a drag. Especially when you think of all the rewards they will possibly reap later on in life because of it.