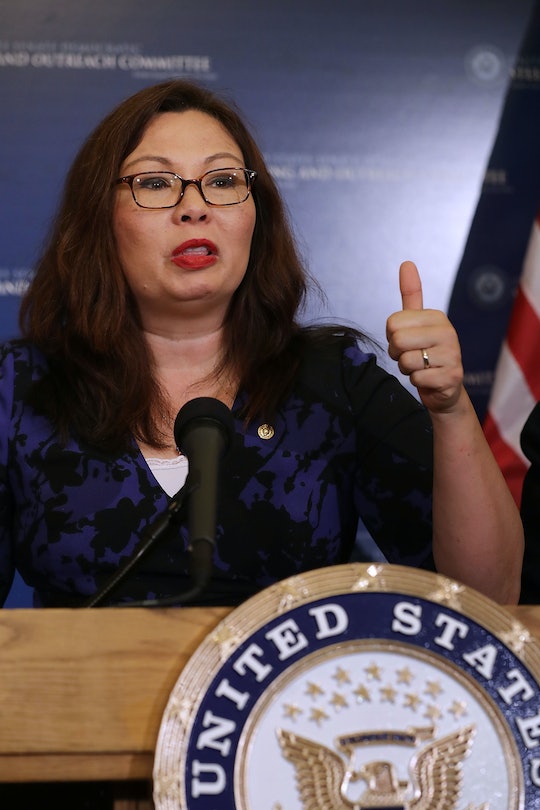 Illinois Sen. Tammy Duckworth will be making history this year by being the first woman to have a child while sitting in Congress. It might seem odd that's it has taken the United States this long to have a "first new mom" senator, but even stranger are the Senate rules that make it so Tammy Duckworth can't "technically" take maternity leave after she gives birth to a baby girl in early April, as she explained in an interview on Wednesday.

As a guest on Politico's "Women Who Rule" podcast, Duckworth explained her predicament as the first sitting senator to have a child. She plans on taking 12 weeks of paid leave, but it's not like a "real" maternity leave, since there isn't anyone who can take over her votes (like a co-worker would pick up your duties at a regular company) while she's gone, as CBS News reported. She would just have to miss out on being able to vote or sponsor legislation, which is not great news for Democrats at the moment since the Republicans have a majority in Congress.

Not only has no one ever had to figure out how to accommodate a new mother in the Senate, the rules are restrictive for any parent working on Capitol Hill. You can't bring a child, under any circumstances, onto the Senate floor, according to the Senate's rules. Duckworth explained on the Politco podcast, "You are not allowed to bring children onto the floor of the Senate at all. If I have to vote, and I’m breastfeeding my child, especially during my maternity leave period, what do I do? Leave her sitting outside?”

Because Duckworth, already the mother of one daughter, is who she is, she's already really thought this through. "I can't leave her with a staff member. That's a conflict of interest, so am I allowed to vote? Can I not do my job?" she asked on the same podcast. And because she is who she is, Duckworth is already working with some top party leaders on both sides of the aisle to find a solution and hopefully modify the Senate rules, according to Politico.

If anyone knows the ramifications of missing votes because you're a mother, it's Duckworth. When she was in the House back in 2014, she took three months of maternity leave and missed a ton of votes, which her opponents reportedly later held against her when she ran for Senate in 2016, as reported in the Chicago Tribune at the time.

This time around though, she's getting ahead of the problem, and she already seems to have some support when it comes to wanting to change the system so that women aren't discriminated against in the Senate for becoming a mother. On Wednesday, Sen. Elizabeth Warren tweeted, "I call dibs on holding @tammyduckworth's baby while she's voting — and fighting to change the Senate's dumb rules so I don't have to."

Hopefully, they can work something out so that a senator on leave can still take part in the voting process and also, if she needs to, bring her baby in to breastfeed during those terribly long days of debating policy after her 12 weeks of leave. And not just for women — new fathers might also have to pick up the slack on child care duty or take a parental leave. It shouldn't have to be this complicated.

It's not just about changing the rules for the Iraq war veteran and double amputee this year — it would be for every other woman on both sides of the aisle who just happen to get pregnant while in office.

When it comes to party politics, it might be hard to convince some more conservative legislators that this matters (or that women can do many, many things while also starting a family). But Duckworth did note on the same Politico podcast that the response to her pregnancy has been received positively from just about everyone, explaining:

Other members on both sides of the aisle been fantastic, people come up to me and it's been almost a uniting piece of news. People are so happy, we've all been hungering for something non-partisan.

It's probably way too soon to start getting excited about Congress passing a law that would make it possible for a woman to take maternity leave and continue to have some sway in the Senate chamber, but Duckworth is at least starting the conversation. Other countries allow women to be both mothers and policymakers. In Iceland, for example, a member of parliament actually addressed the floor while breastfeeding, according to Quartz. An Australian lawmaker also recently made headlines for doing the same.

Duckworth has been an outspoken opponent of President Donald Trump and with the current political environment, her push for a maternity leave and a rule about breastfeeding on the floor could become a heated issue. But it would seem like Republicans, the party of "life" and "family values," would want to work with women in Congress to make a more feasible Senate maternity leave a reality.