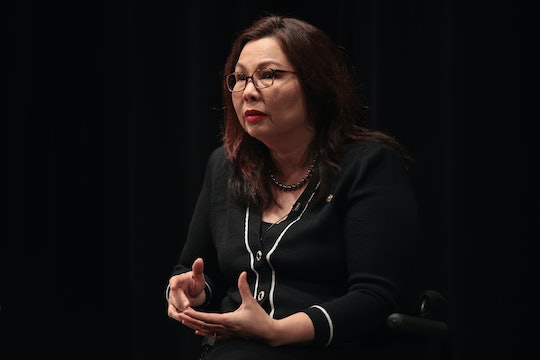 There's not a lot of things that Congress can agree to these days, but Sen. Tammy Duckworth might just be the woman to bring people together on an issue. And a feminist one at that. Just a week after having a baby, Sen. Tammy Duckworth wants to change the Senate rules so that she can bring her baby on the Senate floor. Well, her and every other parent that comes after her. It would be a very big deal.

Duckworth gave birth to her daughter Maile Pearl on April 9, becoming the first senator to deliver a child while in office. And being the first woman to give birth while in office — as Congress has historically been dominated by men — means that there aren't any rules that make it easier for a legislator to be the parent of a small child and also do their job.

Back in February, a pregnant Duckworth discussed the problems she would face, since a senator can't technically "take maternity leave" like employees can in other industries, as reported by Politico. According to the Senate rules, you can't bring a child onto the Senate floor, meaning a mother can't breastfeed their baby to take a vote or give a speech, which can both be lengthy. But if a vote is happening, she has to be there for her constituents — it's not like she can call in a replacement to take her place for a few months like women can do in other industries when they take parental leave. People voted for her; sitting out a vote is an option, but in these politically charged times, Duckworth isn't about to let that happen to the Democrats, who are already outnumbered by Republicans. Hence her new proposal.

On Monday, the Illinois Democrat submitted a resolution that would allow senators, of any gender, to bring an infant under 1 year of age to the Senate floor, according to Fortune. Because the Senate often stacks up votes, according to Politico, and stays in session for an extended period of time during the day, this would make it easier for Duckworth to feed or care for her infant and be there for votes.

Kaitlin Fahey, the senator's chief of staff, told The Hill that Duckworth is "glad to be able to offer this legislation to ensure no senator with an infant is prevented from performing their constitutional responsibilities — and send a message that working parents everywhere deserve family-friendly workplace policies."

“She is optimistic that this will be resolved quickly," she added. According to both The Hill and Politico, senators on both sides of the aisle are "poised" to make sure the resolution passes. It would be historic. In other countries, like Iceland, senators are allowed to bring their kids onto the parliament floor. Others, like Sana Hassainia in Canada or Victoria Donda, in Argentina, have done so and drawn criticism for it, but had their kids on the floor with them nonetheless, as reported by HuffPost.

However, not everyone thinks that way. Comments on social media include a lot of scolding Duckworth for not "getting a nanny" or using childcare. The fact is, that's not financially feasible for all working women in America, something which Duckworth is also working towards changing, according to Moneyish. And as stated above, she can't really take time off in the traditional way if she wants to do her job properly.

Still, Some People *Really* Don't Get It

With more and more women in politics, hopefully these attitudes will start to change, beginning with Duckworth. Daycare and familial help can fall through sometimes and the country must be run, right? This is also good news for fathers, who would be allowed to bring their infants under 1 year old onto the floor, too, to help out their working wives.

It's 2018 — there's no reason for a person to have to choose between doing their job and having a family.