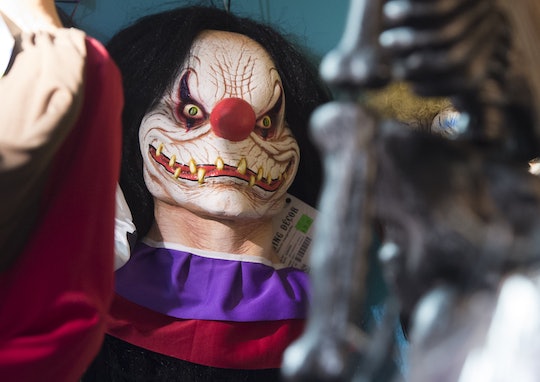 The Creepy Clown Craze Conspiracy of 2016 is a hoax, but it's inspired some truly disturbing incidents across the United States and elsewhere since its mysterious emergence in August. Concerned about roaming clowns and the public's potential violent reaction to them, law enforcement officials are on high alert, warning people to forgo the clown garb and to please, please refrain from harnessing the national fear to play pranks. At least one big box store doesn't want anything to do with the social media-fueled trend, and Target has announced it isn't selling clown masks this year ahead of Halloween. Considering the very bad press that has haunted clowns the past few months, it may be a welcome decision.

"Given the current environment, we have made the decision to remove a variety of clown masks from our assortment, both in stores and online," Target spokesperson Joshua Thomas told WCOO Minneapolis Sunday, explaining why the store had opted to pull now-potentially-dangerous costumes.

The move, of course, is a precautionary measure, after children in a South Carolina apartment complex reported that clowns had been trying to lure them into the woods — wholly unsubstantiated claims that nevertheless set off a nationwide panic and series of unsettling clown incidents across the United States.

As the (false) news of a clown conspiracy to harm children spread, onlookers began jumping on the bandwagon. Arizona teens wearing clown masks were busted after robbing two fast food restaurants; authorities arrested a 13-year-old girl in Chicago after she allegedly asked a "clown" on social media to kill one of her teachers. Unrelated incidents like this accompanied a slew of unsettling clown sightings and incidents in many states, revving up the public's aversion to the characters.

And the situation devolved for clowns too, naturally. In early October, thousands of rowdy Pennsylvania State University students mobbed the streets armed with "tennis rackets, baseball bats, and hockey sticks" searching for clowns after there were reports of a sighting there, OnwardState.com reported. Just days before that, also in Pennsylvania, a 29-year-old man allegedly fatally stabbed a 16-year-old boy wearing a clown mask.

The fear of more reprisals and continued unrest stemming from the clown scare has prompted authorities to warn against wearing clown costumes. The Dartmouth Police Department in Massachusetts, for example, released a PSA warning that it would take a zero-tolerance approach to clown sightings.

"Please keep in mind that disturbing ones peace, trespassing and enticing of a child are arrestable offenses, and that anyone who takes partakes in this senseless and potentially dangerous behavior may be subject to arrest under Massachusetts General Laws," Detective Kyle J. Costa says in the oddy circus-themed video.

For people who make their living entertaining others as clowns, the massive scare has been a disaster, and it even inspired activists to host a "Clown Lives Matter" march in Tucson to show people that clowns are the good guys this week, according to Rolling Stone.

"They are being unfairly targeted," an activist who identifies as Zweebo the Clown told the outlet. "Being threatened with violence. Worst of all, this is driving them out of their jobs ... There have been sheriffs who have even said that 'if you are wearing a clown costume, expect to be beat up.' What kind of message is that sending to people who do it as a job?"

The real-life implications of what could seem like a harmless hoax on the surface show that Target is smart to get out of the clown business, at least for now. Dressing up as a classic ghost or witch is certainly the safer route for Halloween this year.