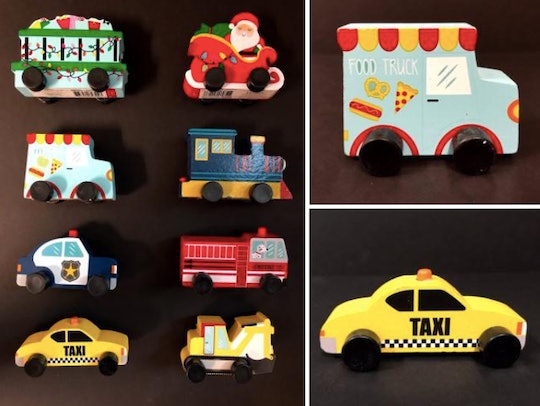 Target Is Recalling About 495,000 Wooden Toy Vehicles Due To A Choking Hazard

As Target announced last week that it was recalling nearly half a million toys after learning parts could detach, the U.S. Consumer Product Safety Commission (CPSC) issued a notice that Target voluntarily recalled about 495,000 wooden toy vehicles due to a possible choking hazard. But before you toss your kid's toys, here's how to find out if yours are included in the recall.

The wooden toy cars from Bullseye’s Playground included in the recall were sold in stores nationwide and online from October to November 2018. The recall notice states that the toys were sold individually in stores for $1 and online in an assortment pack for $8. The CPSC and Target are advising customers to return the toys for a full refund.

The toy vehicles subject to the recall include a caboose, Santa in a sleigh, ice cream/food truck, train, police car, firetruck, taxi, and a digger. The item number, model number (DPCI), and Universal Product Code (UPC) for each toy can be found underneath each vehicle on a white label. The single items have the DPCI or model number of 234-18-0100 and the assortment pack's model number is 234-20-0189.

Here is the UPC information needed to identify each of the vehicles recalled:

The CPSC advised in the recall notice for all consumers to immediately take the toys away from children to prevent possible choking on the vehicle parts.

Target told Romper in a statement that no injuries have been reported. However, there have been four reports of wheels detaching from the toy vehicles, including one report of a missing wheel upon purchase, according to the CPSC's recall notice.

"Target is committed to providing high quality and safe products to our guests," the company said in a statement to Romper. The company also urged customers to return the products to any Target store for a full refund.

This nationwide recall of nearly half a million toys due to a possible choking hazard comes on the heels of new research that showed a concerning number of children going to emergency rooms after swallowing foreign objects, including toy parts. The study, published in the journal Pediatrics, found that the number of kids who went to the ER in the United States nearly doubled between 1995 to 2015. The study showed that the rate of ingestion per 10,000 children went up a whopping 91.5 percent over the course of two decades. According to the study's findings, boys more frequently ingest objects including toys, at nearly 53 percent, as do 1-year-olds.

The lead researcher in the study, Dr. Orsagh-Yentis, said in the findings that regulations and advocacy, similar to this recall, are effective in preventing choking in children. The American Academy of Family Physicians (AAFP) also suggests that parents keep a keen eye on what their kids are playing with and make sure that toys with small detachable parts are kept out of children’s reach.

Keeping the Target recall and new research in mind, now is a good time to search your kids' play rooms and toy cabinets for the wooden car toys, as well as any other toys with small parts that could potentially pose a choking hazard.

More Like This
Do Parents Really Need To Worry About Their Gas Stoves? Pediatricians Explain
Marie Kondo Gives Up Tidying Post-Kids, Sparking Joy For Moms Everywhere
10 Great Podcasts That Will Keep Your Kids Entertained On Your Next Family Road Trip
Sally Field Is The Ultimate Cool Mom Who Once Tried To Set Her Son Up With An Olympian
What Parents Are Talking About — Delivered Straight To Your Inbox