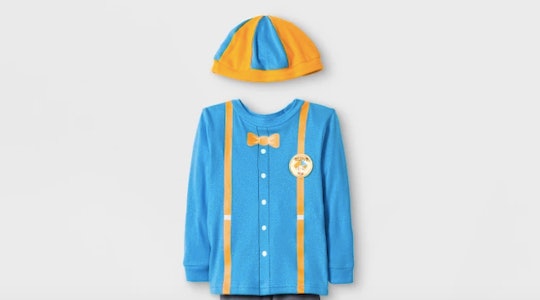 So Your Blippi Fan Can Sing About Fire Trucks In Their Sleep, There Are These PJs

Fire truck! Fire truck! I wish I could ride a fiiiiire truck... If you've never had these lyrics play over and over in your head whilst folding the laundry or shaving your legs, well then you likely aren't familiar with Blippi, the children's performer and YouTube sensation. If you do in fact know this song, and have in fact purposely blasted Led Zepplin to get it out of your head, well then you are clearly the parent of a little Blippi super-fan. Which means you probably should look into these Blippi pajamas from Target.

The jammie set features a long-sleeve shirt with Blippi's signature orange suspenders and bowtie printed onto the fabric, as well as some Blippi-esque gray pants. And of course, no Blippi outfit would be complete without an orange and blue beanie hat. The outfit is 100 percent cotton, and sizes ranges from 2T to 5T.

While they're being billed as PJs, this ensemble could easily double as a Halloween costume. Which would likely result in tiny trick-or-treaters everywhere pointing and nodding at your child with Blippi appreciation. Though it may also result in older adults repeatedly asking your son if he is Tweedledum or Tweedledee, which could mean tears and a plastic pumpkin bucket slammed to the sidewalk in a blind rage. So.

It's kind of wild to think that Blippi is just the result of this dude, Stevin John, sitting down and thinking: "How do I become a YouTube star for toddlers?" Then just piecing together a costume and writing some tunes about monster trucks. Which then lead to an estimated net worth of $20 million. Yep.

It's equally wild that a children's performer could weather the storm of an old video resurfacing in which he voids his bowels on a friend. But survive it he did. (These Target jammies are actually only a small part of the Blippi merch empire. There are also Blippi shoes and Blippi backpacks, and if you go to the Blippi site, there's a full range of apparel and plush dolls.)

One wonders what it was like that fateful morning John set out to piece together his Blippi wardrobe... perhaps never knowing that one day thousands of toddlers would don blue and orange beanies in homage. Beanies they would then promptly lose at the playground. And which would later be spied sadly stomped into the dust beneath the swings...

According to this article in Mashable, John did put quite a bit of thought into his trademark outfit, purposely choosing colors that reflected "creativity" and "trustworthiness". So maybe it actually did feel like a fated moment for him... like when Elton first pulled on a pair of over-sized sunglasses. Or when Ariana Grande first swept her lustrous locks into a high ponytail. Perhaps John walked into a store, and the blue and orange beanie lying before him seemed to have taken on a special glow... and he reached for it and thought, "Yes. That's it. That is the chapeau in which I shall sing about police cars, and make 2-year-olds arise from their playmats in exultation..."