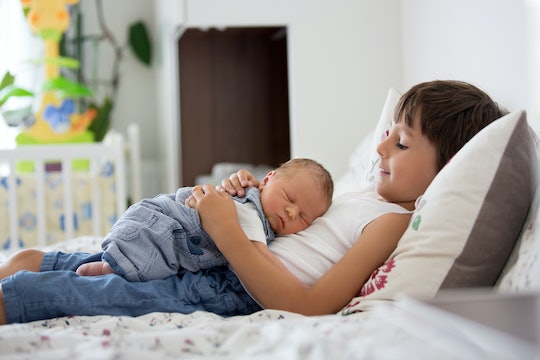 Does Feminism Risk Treating Little Boys Like The Enemy?

Whenever discussion about the latest #MeToo moment turns to how we should ultimately address patriarchal structures in society, some variation of "we need to teach our sons about male privilege" crops up. Our children provide an opportunity for a do-over, for lessons to be taught by feminist mamas wearing I BELIEVE HER t-shirts. This generation of children is coming up in an age where the injustices committed by men in power are being openly shared at the dinner table. Many parents believe that it’s important that their sons grow up with knowledge of these injustices so that they can help shift society. They also want their sons to know that their maleness isn't a curse, in a time of hyper-awareness over male behavior. Some people worry our tendency to be on high alert for a breach of consent among first-graders has created another tricky problem. Do we risk punishing our sons simply for being male?

Phrannie Lyon saw this dynamic play out under entirely innocent circumstances. Lyon’s son had a best friend in the first grade: a girl. Her son and his friend were very affectionate with each other and would often hold hands and give one another hugs. One particular day, Lyon’s son and his friend were exchanging hugs in the hallway when the school principal saw them.

As Lyon’s son explained it to his mother, the principal grabbed him, pressed his 6-year-old body against a wall, and, in an aggressive tone, instructed the boy to never touch his friend again.

Lyon’s son followed the orders he had been given, refraining from any kind of affectionate touch or contact with his friend, and the friendship ultimately dissolved out of fear. He was too scared to get close to her again.

“It didn't matter that they hugged regularly, and they were both consenting friends with that behavior," Lyon says. "A scary adult stepped in and accused him of being bad. What else would a 6-year-old think?”

Her son didn't tell her about the incident for years because he was ashamed and thought he had done something wrong. Today, he is a 13 year old.

It's an unsurprising outcome in a world trying to reconcile historical male power with an egalitarian generation of kids. Lyon reflects, “Something that I find problematic with [the way] many people approach navigating consent is that boys are automatically assumed to be in the wrong. Adults need to understand the repercussions of thinking it is only girls who need protecting.”

I can reject and point out the toxic associations that have been coupled with masculinity.

Part of the issue is an embarrassing lack of education in schools surrounding sex, consent, and emotional and social development skills. Another part is engrained bias on the part of the adults who feel a responsibility to police children's behavior. Ironically, an authoritative response to a situation where children are behaving improperly teaches kids that they don't have any agency or power: it risks reinforcing the same culture we are trying to change.

But there are parents, teachers, and educators who are changing the way we talk to our children about consent, male privilege, and feminism. When we teach children of any gender identity about consent and how to negotiation touch and mutual affection, we’re able to address toxic masculinity as a behavior that we see in the world, not a shaming experience toward men.

“I have zero concerns that my son will grow up feeling badly about being male and I have 100 percent faith in knowing my son will grow up understanding he is privileged in ways other people are not, and that it’s his responsibility to use that privilege to help liberate other people from difficult or unfair situations," Californian mother Chrystal Sparkles tells Romper.

Sparkles explains that when she talks about toxic masculinity she is not vilifying men, but condemning behavior.

“I can reject and point out the toxic associations that have been coupled with masculinity. At the same time, I can surround my son with all kinds of people, of all kinds of genders, who embody and project masculinity in healthy, loving, enticing ways.”

Sparkles explains that if we want to empower our children, they need to understand the world they have come into. In other words, the goal is to create positive modeling rather than a list of forbidden behaviors.

Children are already living in a world where information about power and privilege is woven throughout the fabric of their days, in nuanced and overt ways. They are looking to us, as parents, to frame their experience; not to pretend that gender dynamics don't exist, but to explain and defuse those dynamics.

But how do we prevent our sons from experiencing guilt about their gender when learning about male privilege?

The clothing retailer Zulily recently spurred online criticism for selling kids' t-shirts with slogans like "The future is female" and "Boys will be ['boys' crossed out] feminists." Wrote one commenter on Facebook, "I feel like the 'I am woman, hear me roar' sentiment has been taken a little far, to the point where innocent, well meaning boys/men are being shamed and categorized."

So what are little boys answering to when we dress them in tops that read "the future is female?" More practically, rather than teach them to apologize for the power structure they have inherited, what positive lessons can fill the void?

“Parents must invite their sons to be sad, afraid, hurt, silly and affectionate, and must embrace them as often as they snuggle their daughters," wrote Faith Salie in a recent article in TIME. "Sweet boys learn early on that they can defend themselves against loneliness by reaching out and asking for support rather than turning into people who, literally, grab for power. Sweet boys evolve into open-hearted men who aren’t confused about consent and sexual boundaries, because they experience women as equals.”

Teaching empathy — which, yes, can be taught — is an important piece of the cultural shift, says Carlin Ross, a mother in New York. “I talk with [my son] about my emotions so that he understands that everyone has fear or gets angry or fails," she tells Romper. "I treat him like a person with respect and dignity so he expects that of others as well as himself.”

For others, the notion that guilt is inherently bad deserves a second look. Sparkles says guilt is perhaps not the the worst outcome in a conversation about male privilege, as it indicates self reflection and can be an instigator for change.

“Hopefully, we all feel a little guilty about our own privileges, and we use that guilt to drive our understanding, and then our power, in using that privilege for the betterment of society.”

As the line of thinking goes, equality isn't oppression, it only feels like it is when you come from a place of privilege and power. “The power white American boys have been taught to seize for generations comes from the already powerless, women, people of color, everyone who isn’t us,” wrote Will Leitch in a piece for New York Magazine.

At the same time, so many of us want to protect the innocence, imaginations, and magical thinking of our young children. For Ross, dispelling toxic masculinity doesn't have to involve teaching her son that, say, The End Of Men is nigh. Rather, she focuses on inequality everywhere.

“I try to be truthful and point out inequality when we encounter it in our day to day so he can recognize injustice. Then I flip it like Mr. Roger's mom did and tell him to look for the people doing good, because they're always out there."

Katy Chatel, a mom in Philadelphia, also has an intersectional approach to the subject. “Sometimes relating one -ism to another allows for an experience to be relatable," she tells Romper. "In our family we talk about and experience all sorts of biases, exclusions, and people acting on fear. Grasping these concepts gives young people a foundation for larger social constructs.”

Chatel often speaks with her son about how older people undermine the capabilities of young people based on age bias and no specific knowledge about that person’s skills or experience and this is something that children can easily relate to.

Sparkles believes that kids understand about inequity and privilege already, because they experience it on the playground, in the grocery store, and in the world all around. They can understand quite easily that some of their friends come from houses loaded with cookies, and some of them are never allowed sugar. They understand about systems, because they're constantly focused on fitting into systems themselves.

For all of the parents Romper spoke to, teaching their sons about privilege was viewed as a way to empower them.

"I am clear when advocating for girls and women that I don’t think we are better than boys and men," Chatel says. "I am not asking for more rights. I am asking for everyone to be given an opportunity to have their needs met."

“All of us benefit when women and girls have the same opportunities as men and boys — and it’s on all of us to make that a reality," wrote Canadian Prime Minster Justin Trudeau in an essay for Marie Claire." Our sons have the power and the responsibility to change our culture of sexism. I want my sons to escape the pressure to be a particular kind of masculine that is so damaging to men and to the people around them. I want them to be comfortable being themselves, and being feminists—who stand up for what’s right, and who can look themselves in the eye with pride”

After all, while parents might be just in their discomfort with feminist slogans replacing hyper-masculine Tyrannosaurus Rex dinosaurs and monster trucks on their sons’ t-shirts, who is to say that this new brand of masculinity isn’t making way for the gender equality and a re-thinking of what being a compassionate boy in today’s culture looks like? When our little boys dress in tops that read "the future is female,” I see a young person with a sense of awareness and an ally in the movement for gender equality, even if they are still in diapers. When our sons learn early on about the power structure they have inherited, then our conversations can lean toward how to create change in our society in a positive way with the privilege that we have.

After all, toxic masculinity hurts our boys and feminism is there to help them, says Chatel. “If we protect our sons from feminism, how do we expect to inspire change?”