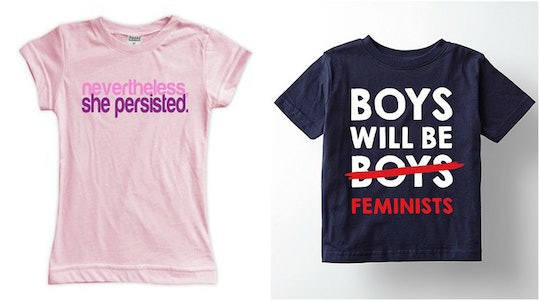 If you're a parent, then you're already likely well aware of the gendered clothing conundrum. While you can get away with dressing your newborn in white and green and yellow for a while, it isn't long until your shopping trips offer up two options — colorful, girly, princess clothing for girls, and trucks, superheroes, and a whole lot of blue, gray, and black for boys. That can be pretty frustrating, so it's pretty exciting to see that Zulily is selling feminist t-shirts for kids that are meant to actually offer up some empowering messages for youngsters. But while some applauded the move, many of the comments left on the company's Facebook page were pretty negative. And it pretty much encapsulated the conversation society has any time the word "feminist" pops up.

Zulily shared a link to the Positivi-Tees sale on its Facebook page on Friday, along with a photo of a little girl wearing a t-shirt that read, "The Future Is Female." Zulily captioned the pic "Empowerment tees for kids," and a quick scroll through the sale showed a range of clothing items that actually carried a variety of different messages — there were feminist t-shirts, to be sure, but also lots of tees endorsing kindness, bravery, self-confidence, friendship, and even Christianity. There were plenty of great options for both boys and girls, many of which sold out quickly, and it's hard to think that the sale could actually be considered offensive. (Zulily did not immediately return Romper's request for comment.) Still, many outspoken parents on Facebook felt differently.

Some parents took to the comments section to praise Zulily for the sale, mostly because they thought it was a nice change to see girls clothing with the same kind of "I'm smart and capable and strong and cool" messages that so often pop up on boys clothing. One user — whose comment earned 175 likes — wrote, "As a boy-mom whose toddler is already inundated with messages about how smart, brave, handsome, and powerful he is, I’m grateful to Zulily for promoting messaging that is empowering to children of all genders."

But, well, then there were the other comments. Comments from people arguing that messages like, "The Future Is Female," "Nevertheless She Persisted," and "Girls Unite!" were unfair to little boys, for example, and that they promoted some kind of reverse sexism that unfairly encouraged female domination (because clearly it's impossible to empower little girls without simultaneously oppressing little boys). One commenter argued that there was an offensive double standard:

HOW SEXIST! if it said the future is male there would be a huge outcry. The future is equal. PLEASE stop selling this now.

While another wrote that this whole feminism thing is just getting way too out of hand:

I get that women are finally feeling empowered and trying to show the world that they won't stand for abuse etc, but I feel like the 'I am woman, hear me roar' sentiment has been taken a little far, to the point where innocent, well meaning boys/men are being shamed and categorized.

And, of course, there were plenty of commenters ready to jump in with a "all lives matter"-esque take on the issue:

This shirt sucks. I wish all these 'empowered women would stop trashing on men and boys.

The future is for better 'human beings.' There are amazing loving hardworking men and women.

And, for good measure, a handful of "get your political beliefs off of my kids' clothing," comments (because, why not):

Why are little kids brought into the political crap? You did it again Zulily. What is wrong with your buyers.

All of these posts - good and bad, for and against are the reason his shirt shouldn't be sold to CHILDREN. They shouldn't be part of our political agenda. Let the adults figure out that stuff and let kids play. KIDS shirts shouldn't command such strong reactions!

Of course, as a number of other commenters aptly noted, promoting feminism or female empowerment isn't at all about bashing boys or trying to claim superiority over them — it's just about letting our little girls know that there is nothing about them that is inherently less worthy or capable than their brothers or the boys in their classes. And it's also about making a little bit of space for girls clothes that don't revolve around being beautiful or finding Prince Charming.

Just as importantly, these messages also help reinforce the idea to boys that girls are worthy of respect, pushing back against some of the patriarchal ideals they'll be taught as they grow without even realizing it. In short? Encouraging girls is good for everyone, because sexism and misogyny hurts boys too. As nice an idea as it may be, promoting "equality for humans" just isn't going to cut it.

The Zulily sale definitely isn't the first time this debate has occurred over gendered kids' clothing and appropriate messages, and it also won't be the last. But the reality, as many parents have already learned perusing the children's clothing aisles, is that sexist messages already abound. There are the more overt examples — in 2013, according to Bust, The Children's Place pulled a girl's t-shirt that joked about being good at shopping, music and dancing, but not math. But there are the less obvious examples too, like the fact that so many girls' items are bright-colored and talk about being sweet and pretty, while the dark-colored boys clothes are all about being strong (can boys not be sweet? Do they really have to be "tough like dad?").

And it's not even just about the kids themselves. In Oct. 2017, one dad shared a photo on Reddit of a "daddy-proof" baby onesie, because clearly fathers are totally clueless when it comes to caring for their kids and that is ~hilarious~.

And then there was this tee from Zazzle...

... which also sells pro-gun control tees, just to put the conversation in perspective.

Honestly, as a mom of both a boy and a girl, I can understand why some parents might have hesitations about sending their little ones to school in t-shirts explicitly promoting feminism. Other people have opinions, and kids (and parents) can be mean. But the fact that putting our boys in feminist tees (or anything even slightly considered "girly" in any way) might seem controversial is exactly why we need these clothes in the first place. Fighting back against sexism isn't easy. But the earlier we can teach our kids that their gender doesn't determine their worth, the better.