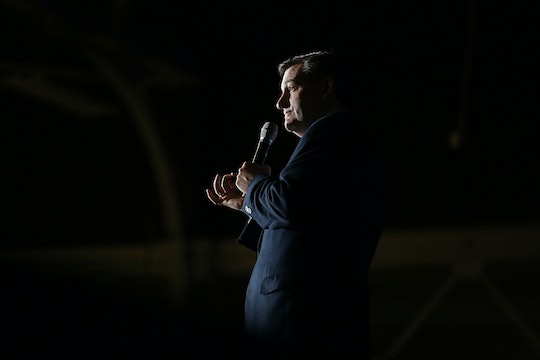 In what will be remembered perhaps as one of the campaign's most defining moments, Texas Sen. Ted Cruz on Tuesday announced he was dropping out of the GOP race. Cruz broke the bad news to his supporters following yet another disappointing primary showing in the Hoosier State of Indiana, where rival Donald Trump swept the competition with a whopping 53 percent of the vote. The erstwhile Republican presidential candidate made it clear in a campaign rally that despite his decision, he would continue to add his voice to the dialogue in different ways.

"From the beginning, I said I would continue on as long as there was a viable path to victory," Cruz said. "Tonight, I am sorry to say, it appears that path has been foreclosed. We are suspending our campaign — but hear me now: I am not suspending my fight for liberty. ... I give you my word that I will continue this fight with all of my strength and all of my heart."

Cruz had gone into the Indiana primary with lagging numbers, sitting behind Trump with a disappointing 29 percent support overall, according to a RealClearPolitics poll aggregate. (Trump, in contrast, stood head and shoulders above the Texas senator with 45 percent.) A last-ditch effort to gather votes by appointing former HP CEO and Republican rival Carly Fiorina as his running mate did little to boost his numbers. By Tuesday night, it was clear that the beleaguered Cruz had run out of steam.

Cruz's departure is a difficult pill for GOP stalwarts to swallow: With the Cruz campaign's demise, Trump was essentially able to grab hold of the Republican nomination for himself, given that Ohio Gov. John Kasich — Trump's current third-place rival — trails him significantly, with just 20 percent support.

Cruz himself seemed to bear the brunt of his decision on Tuesday night with a heavy outlook. "Together, we left it all on the field in Indiana," Cruz said. "We gave it everything we've got. But the voters chose another path."

It's unclear whether Cruz will lend his voice to the Trump campaign over the coming weeks or whether he'll remain silent on the issue. Certainly, the senator and billionaire mogul have butted heads enough over the course of the 2016 race that no one would expect so much of him. But Cruz could prove to be a powerful ally to Trump, even with bad blood between them. Should the senator decide to back Trump for the nomination, it could divide the GOP even further, pitting supposed Republican luddites against new-age right wing ideologues like Cruz. And once the latter is safely in the pocket of Donald Trump — with Cruz's blessing — it could spell the end of the Republican Party.

Perhaps Cruz understood that going into his campaign suspension speech on Tuesday night — it wouldn't have been a huge gamble to assume that in the back of his mind, Cruz was busy plotting ways to merge whatever was left of his base's enthusiasm with Trump's to defeat former Secretary of State Hillary Clinton in the general election this fall. But from the sound of his final address to supporters in Indiana this week, Cruz seemed more prepared to slink back to the sidelines with the rest of the ousted GOP crew and lick his wounds.

"When we launched this campaign 13 months ago, we saw a movement grow," Cruz said on Tuesday. "Thank you to each of you incredible patriots."

Whatever happens next, Ted Cruz's untimely departure is guaranteed to send shockwaves throughout the remaining Republican framework.