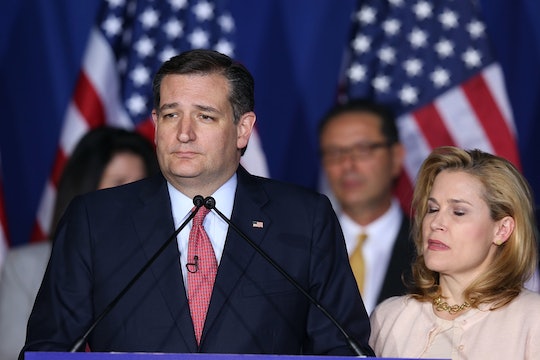 The joke that Republican presidential candidate Sen. Ted Cruz is the Zodiac Killer has been tossed around for months now, but we reached maximum Cruz-Zodiac antic when Cruz dropped out of the race Tuesday night. The Ted Cruz Zodiac Killer jokes about him dropping out show that this particular theory captivated the internet more than most pop culture urban legends.

The theory, which isn't a real theory for a lot of reasons but mainly because it's chronologically impossible, is that Ted Cruz, who was born in 1970, is the serial killer who offed a bunch of people in Northern California in 1968 and was never caught. According to GQ, there are a bunch of different reasons people like to say Cruz = Zodiac, but they mainly have to do with a passing resemblance and the fact that, despite repeatedly claiming to love America and want God to bless it, Cruz seems to hate a lot of people.

Cruz dropping out of the race means much, much less occasion to link the two, which Twitter users seemed to immediately recognize Tuesday. Sensing just hours left in the life of the Zodiac Killer theory, they pulled out all the stops. Watch the Zodiac Killer truthers give their best performance yet:

Seeing The Real Message In Cruz Dropping Out

Predicting His Next Move

Suggesting How Cruz Could Have Won

Being So Over This Zodiac Thing

In March the resemblance between Cruz and the lead singer of the metal band Stryper was pointed out.