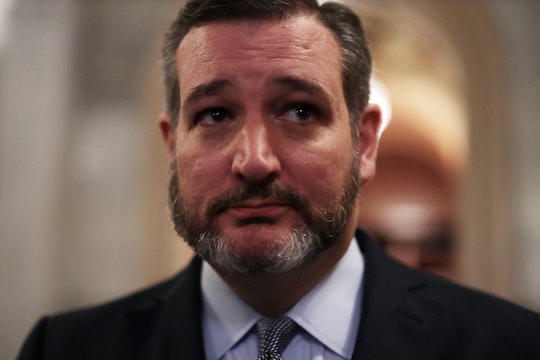 I love a man in a beard. It's one of my things. And so I really didn't need this nonsense out of Ted Cruz tonight. Nor did anyone else, apparently. As the entire world was waiting on tenterhooks to hear what Donald Trump would say during his speech in front of Congress on Tuesday, one thing was distracting everyone. Ted Cruz's beard at the State of the Union sent Twitter reeling with confused emotions. Because we don't need this tonight, OK Ted?

The Texas senator and former presidential hopeful has been looking a little more dapper in recent months. Now it started out pretty slowly; not long after Thanksgiving, Cruz was seen out in public with one of those scraggly-looking sort of beards and it was uncomfortable to look at. But here's where things get confusing; I think some people out there, particularly those of us who might struggle with Cruz's political ideals and policies, were perhaps more comfortable with his awkward beard. Because now that it's grown in and looking (I can't believe I'm about to say this) sort of dapper, it's really shaken some people to their core. Because if you find yourself thinking Cruz looks just this side of cool, do you even know who you are anymore?

So why did Cruz suddenly decide he wanted to grow a beard? At his age, when I'm sorry to say but I think all of a person's facial hair decisions have generally long been made? Well, there's one theory I would like to float... perhaps he was tired of hearing that he looked like the Zodiac killer and figured a beard would help (because that doesn't look suspicious at all).

I'm not the only one who has considered this possibility.

There's another option some people on Twitter have considered. Perhaps Cruz is going through something of a mid-life crisis, what with losing the Republican candidacy to actual Donald Trump and all. Maybe Cruz has decided to become a hipster.

While there were some people who thought Cruz looked pretty good in a beard, even if it felt like a strange choice to make with his face, not everyone was on board with the facial hair. I'll just let their reactions speak for themselves.

Here's the thing; like Cruz's beard or hate it, feel confused about it or just accept it, there's a light at the end of the tunnel. As this person noted in a tweet, the beard could well mean he won't run for president again.

Whether Cruz grows a beard, starts sporting a man bun, shaves his head bald, or whatever else he plans to do with his face and head, he is still Cruz. This we know for sure. And sometimes, when things get serious and upsetting and feeling hopeless, it's nice to just take a minute to focus on Cruz's weird beard.

And for that, maybe we should just thank him. Like, a little tiny bit.