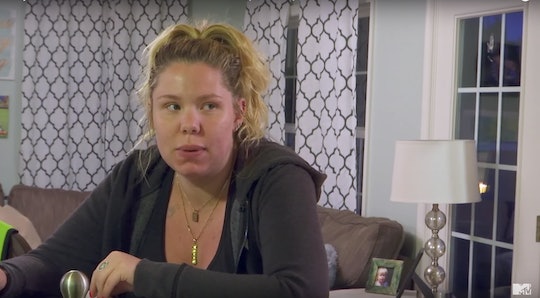 Anyone who takes even one quick look at Kailyn Lowry's Instagram page can see that the Teen Mom 2 star pretty much has one of the most adorable families of all time. Her posts prominently feature her three young boys, including newborn Lux Russell. Still, everything is not as easy as Lowry's (again, extremely cute) pics would suggest — especially when it comes to managing her relationships with the boys' fathers. For example, Kailyn Lowry explained why she has no contact with Chris Lopez, Lux's dad, anymore on a Teen Mom 2 reunion special that aired Monday night. And it's easy to see that, even though their relationship produced a baby Lowry clearly adores, it also brought her a significant amount of pain.

Although Lowry had previously shared an Instagram shot of Lux and his dad bonding about a month after his Aug. 5 birth, it appears that there has been somewhat of a breakdown since then. During the Teen Mom 2 reunion episode, the 25-year-old mom shared with Dr. Drew Pinsky that it had been a while since her youngest and her ex had shared a moment like that one, according to People:

Chris and I haven't seen each other in a month. So, he hasn't seen the baby either. It's kind of a hard pill to swallow. He cheated on me my whole pregnancy. The things I went through all the way leading up to having [Lux] is something I wouldn't wish on my worst enemy.

That's a lot of information for Lowry fans to swallow, and it's certainly a bummer that Lopez had not seen his son for a whole month before the reunion episode was filmed. And, of course, there are still plenty of details about Lowry and Lopez's relationship (or non-relationship) that the public doesn't necessarily know.

But what those who follow Teen Mom 2 drama and what's going on in its stars' lives do know is that this is not exactly where Lowry expected to be. In an August interview with Radar Online published just over a week after Lux was born, she said that she was "hopeful" that she and Lopez would have some kind of father-son relationship and that she was "positive he'll be around."

If things really are turning out how Lowry described them, though, then the situation has definitely taken a turn for the worse. Still, maybe there is some hope: During the same Teen Mom 2 reunion episode, Lowry said in a preview for Part 2 that she and her ex-husband Javi Marroquin, with whom she shares her middle son, 3-year-old Lincoln, had been "co-parenting really well," according to E! News. But even they had faced "a little tension" that resulted in not talking much recently.

As for Lowry and Lopez, it's not super clear how serious their romantic relationship ever was. The two are (or were) reportedly friends from college, as Lowry graduated from the University of Delaware with a degree in mass communications in May. Back in August, In Touch Weekly reported that they were in a casual relationship, and the Lopez had no intention of being part of the baby's life — at least that was the word before Lux was born. All signs suggest that he was around during the time of the baby's birth, as he was spotted leaving the Dover, Delaware hospital were Lowry gave birth along with her Aug. 7.

It seems as though that Lowry and Lopez do have the ability to co-parent, or at least work as a team, to some extent. And if doing so is what's best for them and their son, then all the best to them as they figure it out.