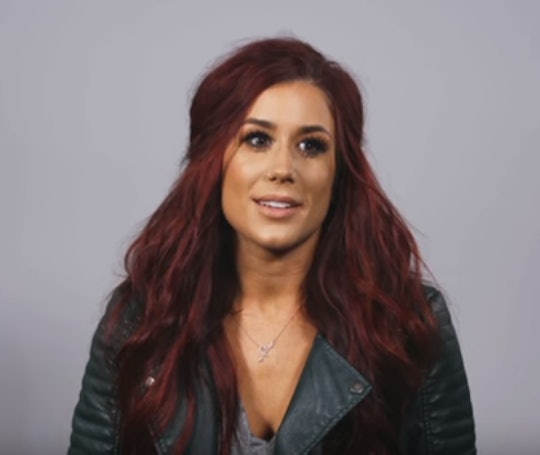 As the summer winds down to a close I have to admit I'm very excited for every pregnant mom-to-be out there. The weather will hopefully turn a little cooler in the coming weeks, and with the lower temperatures will come some blessed relief to pregnant moms like Chelsea Houska from Teen Mom 2. Although in her case the turn in the weather might come a little too late. On Tuesday, Chelsea Houska shared a new pregnancy update and it should get fans pretty excited because it looks like she should be giving birth in the very near future.

Chelsea and her husband Cole DeBoer are expecting their second child together within the next few weeks, according to a recent post to Chelsea's Instagram Story. The couple are already parents to 18-month-old son Watson and Chelsea is also mom to 8-year-old daughter Aubree from a previous relationship, according to People.

The reality star first announced her pregnancy via an Instagram post by sharing a picture of her baby's sonogram with the caption, "GUESS WHAT! A sweet baby girl will be joining the DeBoer clan in a few short months! We could not be more excited! 🎀" Since then, fans have been anxiously watching Chelsea's social media activity to see how her pregnancy is progressing. And her most recent Instagram Story bump pic, where the soon-to-be mom of three announced she is "38 weeks," should be extra exciting.

So obviously it's exciting to be 38 weeks pregnant when the typical gestation period is around 40 weeks. But in Chelsea's case, 38 weeks might be feeling just slightly overdue, to be honest. Because as she noted on Twitter, both Aubree and Watson were born before 38 weeks; Aubree at 35 weeks and Watson at 37.

As you can imagine, giving birth early with her first two pregnancies might be putting both Chelsea and Cole on high alert right now, just in case this baby comes early as well. On Aug. 13 Chelsea admitted on Twitter that, "Every time we go anywhere, Cole has to go over what the game plan is if my water breaks. 'I’m just going to sprint to the car...you make your way to the outside.'"

Not that Cole is trying to rush things along, I'm sure; he's just trying to make sure he has all of his bases covered. Because, as he said in an emotional Instagram post last Thursday, according to OK! Magazine, he wants to make sure his family all "gets what they deserve." He captioned a family photo:

❤️ 😍 my perfect/crazy/beautiful/amazing family!! I try dam hard to give them all an incredible life.... it would take 10 of me to actually give them what they truly deserve! Love you all more than you will ever know!

As happy as the couple clearly are with their family of four, Chelsea is anxious to meet her baby girl. And probably to stop being pregnant. In fact she was sort of done with being pregnant around 33 weeks, as she pointed out in a July tweet, according to People. "Apparently my ‘over it’ stage of pregnancy hits at 33 weeks 5 days because #notmuchlonger," she wrote on Twitter.

She is so anxious to get to the next stage that she's even reaching out to her social media followers to get some tips on when she might be able to expect this third baby. Apparently she had the first two at night and she's wondering if number three will follow suit.

This last stretch of pregnancy can feel like a whole lot of hurry up and wait. But it will happen soon enough, as I'm sure Chelsea is well aware. And when the time comes, I bet these last difficult weeks of pregnancy will feel like a distant dream.