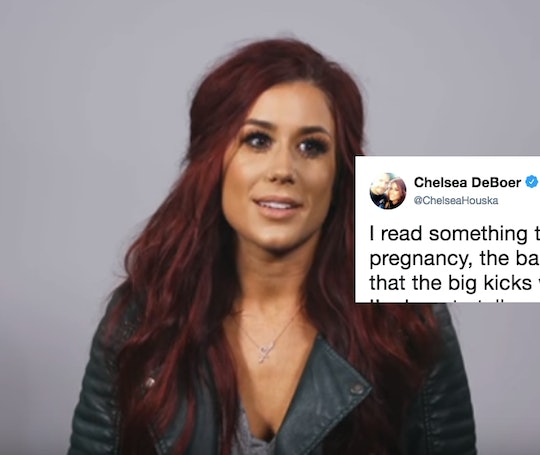 Ah, the third trimester. That special time when you become fully aware that your body is no longer your own. When sleep eludes you because you're frequently being kicked to kingdom come, except from your insides. It's a truly magical time, right? Well... sort of, I guess. When Teen Mom 2's Chelsea Houska tweets about pregnancy kicks in her third trimester, she got a whole lot of sympathy from moms who have been there themselves.

Chelsea and her husband, Cole DeBoer, are expecting a little girl in the coming weeks. The reality star is already mom to two other children, 18-month-old son Watson DeBoer who she shares with Cole and 8-year-old daughter Aubree Lind from a previous relationship, according to People. The couple shared the happy news that their family was growing by one more back in March via an Instagram post. Chelsea posted a sonogram picture with the caption; "...GUESS WHAT! A sweet baby girl will be joining the DeBoer clan in a few short months! We could not be more excited! 🎀"

As most moms know, those first few months of pregnancy are filled up with so many hopes and dreams that it's a little easier to ignore some physical discomfort. But that can change as the months go on, and you get bigger, and your baby gets bigger... by the third trimester s**t gets pretty real. As Chelsea so aptly pointed out in a Thursday tweet:

I read something that said at this stage of pregnancy, the baby is so smooshed in there that the big kicks will now just be small jabs. I’m here to tell you that is FALSE. There’s nothing small about these jabs to the ribs

Is Chelsea right? Are the baby kicks still tough in the third trimester? According to What To Expect When You're Expecting, hell yes. "From here on out, it’s a bit (to a lot!) more cramped in the womb," the website noted. "You can expect to feel fetal activity every day for the rest of your pregnancy."

The movement includes a real mixed bag of punches, jabs, rolls, and kicks. In fact, you're going to want to feel loads of movement in that last trimester. Because your baby is big and wants out of your belly so they can roam around and cry and see people and stuff.

Other moms were quick to commiserate with Chelsea on Twitter, sharing their own pregnancy experiences. They also reassured her that yes, babies definitely kick pretty hard in that third trimester despite what she might have heard.

One slight drawback to all of these brave women sharing stories about being kicked about by their babies from the inside?

Some of Chelsea's followers aren't sure if they want kids now.

Now before anyone starts to freak out and make major decisions about their future, please know that the third trimesters kicks are bad. But generally speaking, the baby that comes after tends to be pretty worth it, in my opinion.

That being said, Chelsea has apparently been over the whole pregnancy thing since she hit 33 weeks. Or 33 weeks and 5 days, to be more specific. She tweeted on July 29 that she was "apparently at the 'over it' stage of pregnancy," which is sort of sad when you think how much further she has to go before she's done.

But the good news is that, at the end of it all, she'll get to bring a sweet little baby on home with her. That will make it all worth it, right?