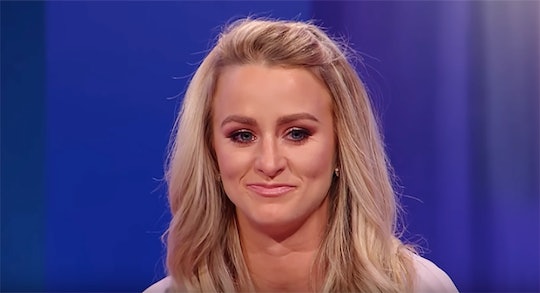 Teen Mom 2 star Leah Messer is one of the busiest moms in the entire franchise. Want proof? Not only is Messer a single parent to three young kiddos (twins Aliannah "Alli" and Aleeah "Gracie" Messer, 8, and Adalynn, 5), but she is also the parent to a child with a disability. Although Messer has support from her family and the fathers of her children, it doesn't mean every day is smooth sailing. And just like any other stressed out parent, Leah Messer has "mommy brain" moments from time to time. As for Messer's latest flub, she incorrectly stated Adalynn's age in an Instagram post about her first day of kindergarten. Luckily, fellow moms were there to support Messer with their own personal anecdotes about mommy brain syndrome. As it turns out, this phenomenon is very common.

Messer took to Instagram on Tuesday to share five adorable photos of her daughters' first days of school. And in the first snap of the set, Messer posted a cute shot of Adalynn holding a chalkboard announcing her first day of kindergarten. The board featured everything from Adalynn's interests all the way to her age.

Although Adalynn is 5 years old at the moment, Messer initially wrote "6" under the "I AM" section of the board. Considering Adalynn's birthday is only six months away, it's not too wild Messer aged her a bit. Plus, what parent doesn't get their child's age incorrect on occasion? It happens.

Of course, Messer was under no obligation to correct her mistake. But Messer ultimately decided to rectify the error for her followers, captioning a corrected photo:

I had total mommy brain on the first day of school... We were practicing numbers, letters, filming. I was sooo sad Addie started Kindergarten, starting a new schedule with the twins, getting into our school routine and we wrote down the wrong number. Just like I started to spell Adalynn ‘Addalynn’ because I’m used to spelling out ‘Addie’ ... Let’s be honest, it happens to the best of us. 😅 I was commenting someone back yesterday telling them she was 5 and I was like... Omgoodness!!! 😱😱... Does our board have a 6 and sure enough.... it did. LOL Just say a prayer and send some good vibes our way this year. 😂😂

Aww. How cute is Adalynn here? I just love her sassy pose.

Following Messer's candid admission (it's OK, girl), many parents took to the post's comments section to share their own experiences with "mommy brain."

"I did the same thing!" someone admitted on Instagram. "My son is in First grade and I put that he’s 5 when he’s actually 6! Mom brain!"

"I had an even worse mom brain I took my kids back to school for their first day this past Monday but turns out their first day isn't until tomorrow," a fan added. "I felt so silly when we got to the school and only the teachers were there for institute day ... "

"Sending positive vibes to you a fellow momma of 3," a commenter chimed in. "I totally understand the mommy brain. Happens to me more than I would like to admit lol."

"I'm cracking up @leahdawnmtv92My sons are in College and high school and I still manage to do things like this!" a person penned. "It's never gonna stop!!"

Yep, I think it's safe to say just about every parent has been in Messer's position at some point or another.

Although all of these anecdotes — including Messer's — have a comedic element to them, supporting fellow parents is no laughing matter. These messages from parents should act a reminder to practice kindness as families start the new school year.

Parenting mistakes are common, after all, and everyone is doing their best — even when "mommy brain" strikes.