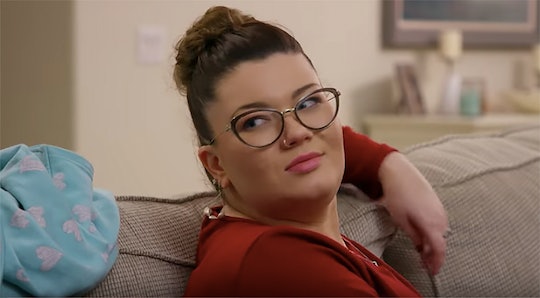 Teen Mom OG Star Amber Portwood welcomed her second child, a baby boy named James, into the world on May 8. Fans were thrilled for the mom, especially since Portwood had endured years of custody issues regarding her now 9-year-old daughter, Leah Shirley. But just when you thought things were on an upswing for the mom, some fans criticized this co-sleeping photo of Amber Portwood and baby James. The criticism must have hurt Portwood because she eventually responded to the backlash with a pointed message telling her haters to back off. And whether you're a fan of co-sleeping or not, it's hard to disagree that Portwood has a point about mom-shaming.

Now that Portwood is finally settled in all areas of her life, including her relationship with James' father, cinematographer Andrew Glennon, she's more active on social media. Portwood is more than happy to share snaps of her two kiddos bonding and spending time together, or pics of herself snuggling with the newborn. And on Sunday, Portwood shared a sweet yet supposedly controversial photo of herself co-sleeping with James.

"Cuddling with my amazing little baby James sending all our love 💖 #blessedmommy," Portwood captioned the cuddly shot, according to Instagram. But wait — that's not all. Portwood later amended the post after she received hateful and concerned comments about the pic, writing: "*(& I'm wide awake so don't even try to b***h about how he's laying!😤 ya'll tried to pull that sh*t on Andrew's profile)."

So, why were people upset about the photo? Well, besides the fact that some parents are against co-sleeping (to each their own, of course), some people think James' face is too close to the blankets in Portwood's bed.

One person argued on the Teen Mom OG and Teen Mom 2 Reddit forum:

I think the biggest issue here is the blankets bunched up around James’ face. You can cosleep safely. I know that Amber is awake here obviously, but I can only hope that if she is cosleeping that she is making sure there are no blankets or pillows around his head and that Andrew is either a light enough sleeper to where he notices when he’s close to the baby or he’s sleeping somewhere else for the time being. It also may be a concern if she’s taking meds that make her sleep hard. I mean we really don’t know if she’s just laying with him here or this is how they go to bed, but even if she’s just laying with him, I’d move the blanket ...

Here comes the obligatory “I am an ER nurse and there is no such thing as safe bedsharing.” That was your warning :) seriously though, there is a difference between co-sleeping and bedsharing. Bedsharing is not safe, infants need a dedicated sleep space that is freee from blankets, pillows, and stuffed animals, and this could be a bassinet, pack and play, small matress in a box right next to the bed and in the same room. Being in the same room is considered a form of co-sleeping and that is encouraged, babies love to be close to their mommys. I also was a breastfeeding mom with a baby that did not sleep, and I know the struggles. No matter what you say, you are not doing it “safely.” If you have raised 3 children that way, I am glad that everything worked out for you but that does not make it safe. In my few years in the ED I have seen infant death due to suffocation and bedsharing 3 times. It is devastating and avoidable.

"Dangerous, and sets up baby with dependent sleeping habits," another commenter said about co-sleeping.

And one fan addressed Portwood's message about the comments left on Glennon's photos of James, writing on Instagram:

Oh you mean the photo with the baby’s head against a pillow? Yeah, not safe and he got called out.

Of course, a few of these comments are well-intentioned. No one wants baby James to be in an unsafe situation at the end of the day. Concern aside, however, one has to wonder what people are actually upset about here. For starters, it's not even clear what Portwood is doing in the photo. Fans have no way of knowing if the two are simply snuggling after breastfeeding or are bed-sharing, a term often confused with co-sleeping. The act of co-sleeping is different than bed-sharing because parents and kids lie on different sleep surfaces, but people often refer to bed-sharing as co-sleeping regardless. Either way, there's not enough information about this photo for people to share judgement.

It's also worth considering Portwood's past history here, like the fact she lost her infant sister to Sudden infant death syndrome (SIDS). As one fan pointed out, I bet Portwood is especially aware of safety guidelines regarding co-sleeping and bed-sharing because of this loss. The fan argued:

I think a lot of people forget Amber's sister died of SIDS when Amber was 5. How anxiety ridden she was when Leah was having trouble breathing as an infant. Amber may not be the most motherly mom of the series. But I imagine she takes the safe sleeping guidelines very seriously because of the trauma she experienced when her sister passed away.

Others pointed out there's nothing wrong with James' position in the pic.

"I'm actually going to agree with her about this one. A baby sleeping on his mother's chest is the most comfortable place place for him to sleep if she is awake or not," a commenter said. "This reminds a child of the womb and they sleep very soundly, and moms do to, since the womb is the place we could protect them best from the world."

"There is nothing wrong on how he is cuddled especially with you awake," someone else agreed.

A person chimed in: "So precious!!! He’s looks safe and loved in your arms❤️."

Overall, people should probably give Portwood a bit more credit as a parent. Portwood is reentering parenthood following a lot of hardship, and I highly doubt she'd ever put her young son in any serious danger.