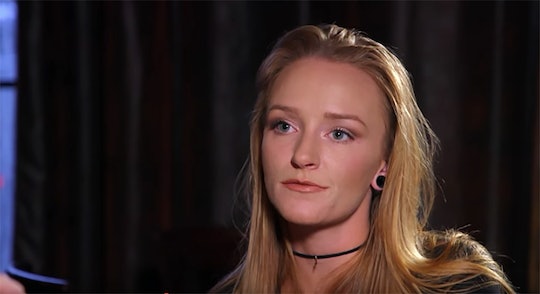 'Teen Mom's Maci Bookout Had A Subtle, But Perfect Response To All Those Pregnancy Rumors

Teen Mom OG star Maci Bookout has been the subject of pregnancy speculation for months. From suspicious remarks about Bookout's supposedly baggy clothing to gossip about her "pregnancy face" (some people took to social media in July to debate the size of her nose... ugh), it seems like fans are convinced a baby is on the way. But on Wednesday, Maci Bookout seemingly shut down pregnancy rumors with a low-key yet pointed tweet. Apparently, Bookout isn't thrilled about the public's ongoing interest in uterus. Surprise, surprise.

In a not so shocking twist, Bookout isn't the only reality star who has dealt with pregnancy rumors in the last few months. Teen Mom 2 star Leah Messer got a taste of the drama on Tuesday when she took to Instagram to share a picture of herself in a white top and form-fitting blue skirt. Unfortunately, the cute pic inspired a ton of offensive comments about Messer's "bump."

"Oh I see a belly!!" one person said about the photo on Instagram.

"Def Preggo I’m sure she will spill the beans in a couple months," someone else added. "Hopefully this baby daddy will stay this time."

Another person chimed in: "I see a baby bump."

Rest assured, however, Messer is not pregnant. "You guys are sweet and NOOOO I'm not pregnant," Messer responded to the speculation, according to In Touch Weekly. "What the!" Ugh, it's upsetting Messer had to address this situation to begin with.

Considering Bookout is no stranger to rude comments about her body, she felt compelled to add her two cents when a fan congratulated her and Messer for putting up with all of the recent gossip.

"So today I found out @TM2LeahDawn and @MaciBookout are pregnant ... like I did last week... And last month...," the person sarcastically tweeted. "If the day comes Congratulations!!!!! And if it doesn't then congratulations for putting up with the press!!!!"

Bookout, who already has three children (Bentley, 9, Jayde, 3, and Maverick, 2), commented on the message: "lol love this."

Yep, it's clear Bookout is a believer in less is more. Although Bookout didn't outright deny the rumors, she managed to address them in a subtle yet satisfying way.

But wait, that's not all. Bookout — as noted by the Teen Mom OG and Teen Mom 2 Reddit forum — also retweeted a message about polycystic ovarian syndrome. PCOS is a hormonal disorder that can cause "infrequent or prolonged menstrual periods," and a person's ovaries can fail to release eggs because they "may develop numerous small collections of fluid," according to the Mayo Clinic.

"Like @macibookout I have PCOS," the commenter penned. "For the media to keep saying she is pregnant while she could potentially be struggling with fertility etc is disgusting imo."

Fans of Bookout probably remember when she opened up about her PCOS struggle on TMOG in February. “Sometimes I’m like if I didn’t have PCOS, then maybe I wouldn’t have been so irritable with my children today,” Bookout said about her frustrating diagnosis, according to The Mighty.

Of course, irritability is just one symptom of PCOS, and it's possible Bookout is suffering from fertility issues like the fan mentioned. Either way, it's no one's business.

Not to mention, Bookout suffered a miscarriage sometime in 2017. It's pretty insensitive to speculate about a person's possible pregnancy when they've endured such a heartbreaking loss, to say the least.

The good news is Bookout has lots of supporters in her corner during this time.

One fan, for example, wrote on Reddit, "This is one of the many reasons people shouldn't speculate on a pregnancy when it's not confirmed. For all we know they're trying to get pregnant and it's not happening." They added, "That is truly heart breaking, and to constantly hear people wondering if you're pregnant must be awful."

Yep, there's no question it's unkind for others to speculate about another person's body. Hopefully, Bookout's subtle tweet will silence these pregnancy rumors until she can address them on the next season of TMOG, if she chooses to. In the meantime, fans should probably give them a rest.