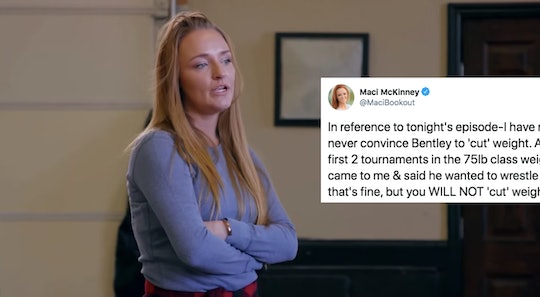 Following Tuesday night's episode of MTV's Teen Mom OG, Maci Bookout has addressed backlash about putting her son Bentley on a "strict" diet to maintain his weight for wrestling.

On the newest episode of Teen Mom OG, the mom of three said that she had signed her 11-year-old son Bentley up for some private wrestling lessons. "Last year Bentley was struggling to deal with his dad's addiction," she said in the episode. Bentley's father Ryan Edwards has struggled with drug addiction in the past and ended up in prison in 2019 for three months for heroin possession, according to RadarOnline. Bookout suggested counseling for Bentley, but found that wresting "has been a great outlet for him."

Bookout went on to say that Bentley wants to make it to the state tournament, which was why she signed him up for private wrestling lessons. As part of this, Bookout said that her son "has to stick to a strict diet if he wants to achieve his goal."

In a clip from Teen Mom OG, Bentley is seen at wrestling practice and then tells his mom he's hungry. When he tells her he would like chicken to eat, she says to him, "What? You have lost your mind." She said that Bentley weighs around 74-75 pounds, "so now he's on a very strict, good, healthy calorie diet. Lots of water and workouts to actually cut weight."

Fans of the show were pretty concerned to hear that the 11-year-old was on such a restrictive diet.

"I am normally on the same page with you about so much — but the weight thing… I have a son the same age as Bentley and I could not imagine telling him it is OK to lose weight at his age. He’s a growing boy and his body needs those calories and nutrients. Let him be little and let him have the damn chocolate milk," one follower wrote on Bookout's Instagram in a since-deleted comment, according to Access Online.

"Awful!! Feed the kid chicken it's a healthy protein," another commented on YouTube. "She is setting this poor boy up to bad eating habits and an eating disorder."

"That kid is stressed out as it is...wrestling and monitoring weight all the time seems like it will create more anxiety," one viewer on Twitter commented.

On Tuesday evening, Bookout responded to the backlash. "In reference to tonight's episode — I have never and will never convince Bentley to 'cut' weight," she wrote on Twitter. "After wrestling his first 2 tournaments in the 75lb class weighing in at 72 — he came to me & said he wanted to wrestle at 70. I told him that's fine, but you WILL NOT 'cut' weight."

"I will lay out a healthy scheduled diet for u, u can eat salads, grilled chicken, veggies, good carbs — instead of pizza, doritos & candybars," she continued. "Through the season, he decided he didn't like it — I told him that's okay! U can go back to usual and wrestle at 75 which is what he did."

While Bookout received messages of support from some fans on Twitter who've been involved in the sport, Bentley's father also expressed his concern about his wrestling diet during the episode.

"I thought wrestling was about technique. I know you gotta have a little bit of strength, so why aren't you trying to gain weight? You need to be gaining weight," Edwards told Bentley on Tuesday night's episode of Teen Mom OG. "You know what's gonna happen? You're gonna stunt your growth, then when you really...it's time to get bigger, you're just gonna be a great bloomer and it's gonna suck for you."