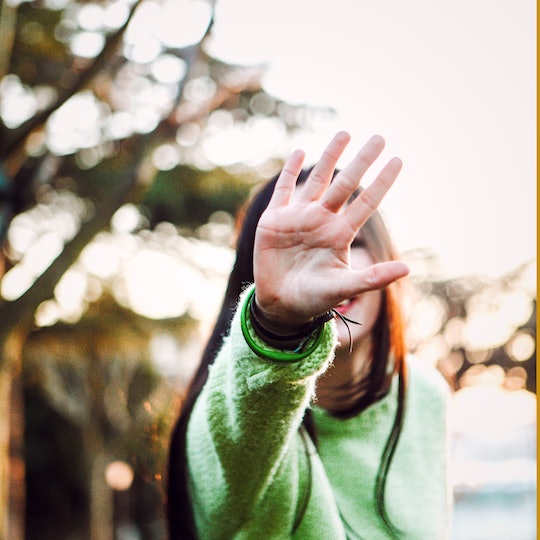 Mom bloggers have become a significant force in recent years, with parents sharing tidbits from their lives on the internet to connect with others and, in some cases, make a living. But what happens when your kids don't want to be part of that lifestyle? In the case of one teen of a mom influencer who was "sick" of having their photo taken, they decided take matters into their own hands.

Last month, an anonymous teen took to the popular "Am I The A**hole" subreddit group on Reddit to explain their situation. "I am a teenager and my mom is kinda famous on Instagram and blogging. She had a mommy blog all when I was growing up and of course me and my sister were always involved," Reddit user u/FinallyAnonymous6 began. "It sucks because there's so much our there about us and it's what's gonna come up when I'm looking for a job, when I'm dating, when anyone looks up my name."

So in an effort to reclaim a little privacy, the teen made a decision to order some custom-made hoodies with a clear message splashed across them, such as "No photos," "No videos," "I do not consent to be photographed," "No means no," "Respect my privacy," "No cameras," and "No profiting off my image. "

The teen's mother, however, was not impressed.

"My mom was mad when they showed up, and really mad when I'm wearing mine," u/FinallyAnonymous6 wrote. "Like she says she just wants pictures to remember my young years by, she won't post ones without asking."

The question of whether or not parents should share their children's photos on social media without their permission comes up more and more lately, particularly with the advent of mom blogging as an industry. Parents often want to share photos of their kids with the followers not just for work but also as a way of connecting with their community. But what about when their kids emphatically say "no thank you" as this teen has done?

According to Reddit users, this teen is not the a**hole in this situation and the mom should simply stop. "You have every right to feel that way. I think the hoodie is a brilliant idea!" one Reddit user commented. "This is really interesting actually. Perhaps legislation needs to be introduced to protect children from this kind of thing. We need a national discussion about the privacy rights of kids."

Another suggested that the teen's mom could still blog but find ways to protect her children's privacy. "Online mom groups have all developed a language of abbreviations to protect the families. DH= husband, DD=daughter, DS=son. Have two sons? DS1 and DS2. Or join a private mom group. It’s not that hard."

"Even if mom doesn't want to rebrand," another suggested, "just something as simple as using OP's first initials in posts (i.e. "B" in lieu of "Becky") and just throw an emoji or something over OP's face in photos. It's f**ked up she's still trying to manipulate her own kid to make a buck when her kid said she wants no part of it.

Another noticed this is becoming a trend, "You're not the first kid of a mommy blogger to say this, and you won't be the last. I'm sorry you had to resort to the hoodies, but it was a clever and effective plan. Do what you have to do to keep yourself sane, and life as private as you want it to be."

The frustrated teen followed up the original question by writing that they didn't believe their boundaries would "ever" be respected, unfortunately.