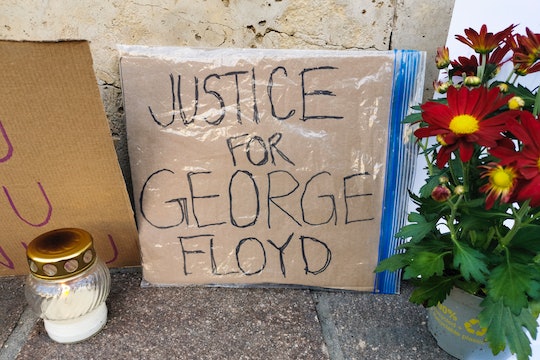 In the wake of the police killing of yet another unarmed Black man, one teenager started a "Justice For George Floyd" petition on Change.org and it's already garnered millions of signatures. Nearly 12 million signatures, in fact, which has made the 15-year-old's petition Change.org's most popular of all time.

The day after Floyd was killed in police custody in Minneapolis on May 25, a 15-year-old teenager from Oregon named Kellen decided to try and reach Minneapolis Mayor Jacob Frey and Hennepin County District Attorney Mike Freeman "to beg to have the officers involved in this disgusting situation fired and for charges to be filed immediately."

"George Floyd was murdered by a Minneapolis police officer," Kellen's petition on Change.org started on May 26 reads. "George was handcuffed and restrained and being completely cooperative when this all went down. The officer put his knee on George’s neck choking him for minutes on minutes while George screamed that he could not breathe. Bystanders beg for the police officer to take his knee off George’s neck, but the officer didn’t listen and continued to choke him."

Derek Chauvin, the officer who had his knee pressed on Floyd's neck for nearly nine minutes as he yelled "I can't breathe" has since been fired and charged with third-degree murder and second-degree manslaughter, according to CNBC. The three other officers — Thomas Lane, J.A. Kueng, and Tou Thoa — were also fired, but have not been charged, CNN reported.

"Please help us get justice for George and his family!" Kellen's petition reads. And that's what millions of people have tried to do by signing it, including celebrities Yoko Ono and Nicki Minaj who have shared a link to it and encouraged others to sign.

As of publication, Kellen's Change.org petition had over 11.7 million signatures and was quickly inching towards its goal of 12 million.

Change.org confirmed to Forbes that Kellen's petition made history as the platform's most popular and had been "gaining an average of one signature every two seconds" as of Friday. "To be honest, I wasn’t expecting a lot to come from making the petition," Kellen told Seventeen magazine. "But I definitely had hope from the beginning."

Although Chauvin has been charged and the other officers involved in Floyd's arrest have been fired, Kellen wants to see more. In an update to the petition, Kellen asked people send video messages to georgefloydvideos@gmail.com about "what justice for George Floyd means" to them.

"District Attorney Mike Freeman needs to hear from us now to make sure the other three involved officers are held accountable," the petition's update reads. "Right now: We are looking for people to send us a quick video on why you signed the petition and what justice for George Floyd would mean to you."

Kellen's petition came at a time when people clearly needed it, when people wanted to use their voices to help enact change. You can help reach the petition's goal of 12 million by signing it here.