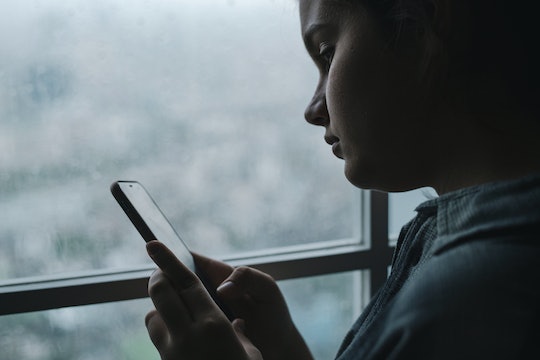 There are many benefits to technology (Prime Day, anyone?) and it can be a useful for a child's development. But as much as technology can enrich lives, researchers warn that teens who use social media often are more likely to experience depressive symptoms. The findings, which were published in the Journal of the American Medical Association's Pediatrics (JAMA Pediatrics) on Monday, is a reminder for parents to encourage their teenagers to log off of the 'gram every once and while.

In the study, researchers aimed to find a link between screen time and depression, a goal they embarked on by compiling a group of 3,826 Canadian students — across 31 schools — who were in grades seventh to 11th at the time, according to the New York Daily News. The students filled out surveys regarding their screen behavior and possible symptoms of depression, and questions touched on how much time per day they spent playing video games, using social media, watching television, and used a computer. Interestingly enough 47 percent of respondents were female, according to JAMA Pediatrics.

The teens rated their depression symptoms on a scale, and for each additional hour young people spent on social media or TV, the severity of depressive symptoms they had went up, according to JAMA Pediatrics. What's worse? The researchers were able to draw a link between high social media use over years with increased depression rates, according to CNN.

As the relationship between video gaming and depression, "no significant associations were found," according to CNN.

the study's authors said, according to the British Medical Journal: "To our knowledge, this study is the first to use developmental data from a large sample of adolescents to examine the association between 4 types of screen time and depression."

Personally, this study is scary to me because my kids are getting older, but I'll admit that these findings make perfect sense. I was perfectly happy with my family's summer vacation to a gorgeous resort an hour away, for example, until I went on Facebook and saw that another family I barely knew was on an even more gorgeous Greek island. If I felt that way as an adult, what is a young person without the necessary emotional tools to do?

Of course, the concern about technology and social media use regarding teens has been examined by researchers before. In 2017, for instance, a study of 8th to 12th graders over a five-year period found that teens who spent time on technological devices were more likely to suffer over mental health issues than teens who spend more time outdoors, in church, or doing homework, according to NPR.

The good news in all of this? A person's brain doesn't fully develop until around age 25, so parents have plenty of time to right the course in the technology department. Whether it be enforcing strict rules about screen time or setting up a central charging station in your house to better monitor phone use, there are plenty of tips out there for parents who might struggle with this issue.

Technology has led to so many good things, like fundraising sites, new careers, and hilarious viral videos, to name a few examples, but it has a downside too. As a parent, I'm concerned about the growing link between frequent social media use and depression in teens, and I'm sure I'm not alone here.