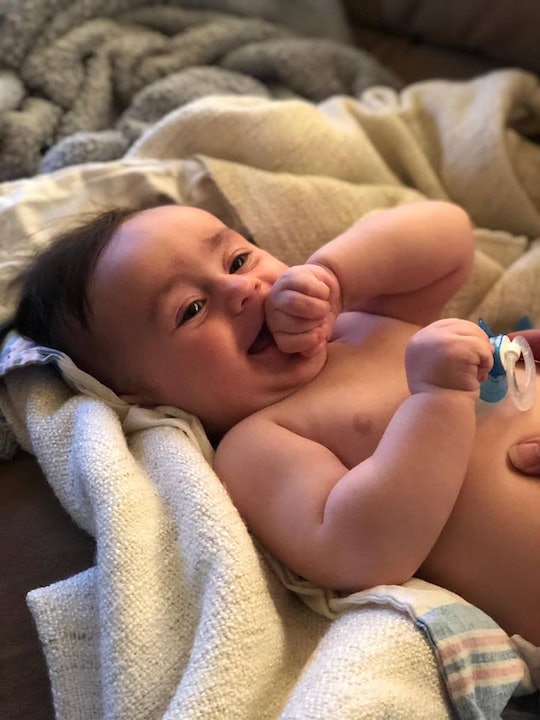 Teething Babies (Hear Me Out)

In my 20s, I considered myself to be something of a badass. I figured since I could party with the best of them, throw back copious amounts of tequila, and could be found crowdsurfing at whatever metal show I was attending on any given weeknight, I was tough. Hell, I broke three ribs at a concert once! It doesn't get more metal than that, right? Wrong. It does. Because even in my wildest rock 'n' roll dreams, as a mom I've realized that I'll never be as cool, or as metal, as my teething 6-month-old.

Parents love to complain about teething — we invoke it whenever our kids show discontent age 4 months to approximately kindergarten — but can we stop to appreciate what is happening to our babies as they gnaw like cavemen on rattles, car keys, sticks, and other people's bones? They're chomping down with such gusto because actual bones are moving through the soft, pink skin lining their adorable faceholes. And those bones keep moving, ever-so-slowly, until they cut through their baby gums like the iceberg that sunk The Titanic. Actual bones, just moving inside their slobbery gobs.

And do you know how my baby — my metal-ass baby, whose for-real baby bones are reconfiguring inside his cakehole as I type — responds to the phenomenon we casually call "teething"? He smiles. He giggles. He laughs at his 4-year-old brother's shenanigans (shenanigans that would surely be annoying to anyone who has osseous matter migrating through their tiny traps). He slobbers on my goddamn work clothes almost every morning, sure, but even the amount of admittedly disgusting piehole snot isn't enough to fully encapsulate what is taking place inside this kid's kisser.

No one is more metal than a teething baby.

I can't go to a simple teeth cleaning without demanding my sadist of a dentist sedate me with the strongest concoction of narcotics he's legally allowed to administer. If I accidentally bite the inside of my cheek I will let out a string of curse words so horrifically offensive they're sure to make your problematic mother-in-law blush. Then I willingly enter into a state of angry solitude that lasts, at minimum, a week. That's how I respond to mouth pain, people. Yes, I can push a kid out of my v-hole no problem (twice!), but if I so much as suffer a mild toothache I will be rendered incapacitated for an admittedly embarrassing amount of time.

But here's this kid — this miniature human being who lacks the ability to articulate via any kind of coherent language how he feels on any given day, let alone a day when his future fangs are forcing their way through his aching gums — smiling away. He's happy to chew on some chilled plastic whatever-the-hell, cooing and jabbering and holding onto his tiny little toes because, yes, he just realized he has toes and those 10 pudgy phalanges are constantly blowing his baby mind.

Sure, he can spike a fever. And, yes, teething is usually synonymous with some kind of ungodly sleep regression. But, like, that's it. That's the extent to which this child will complain about the bony, enamel-coated spikes protruding from his jaw. To the untrained, child-free masses, this teething baby is just a normal baby: one that fusses some times but not always, and only because that's how babies communicate that, no, they're not hungry or wet or tired, they just have a strand of your hair wrapped around a toe and omg figure it out. Remove the damn strand from that precious toe.

So, sure, we can go on and on about how "metal" Mötley Crüe was back in their prime: destroying hotel rooms and doing all the drugs and having all the sex and, apparently, snorting all the ants off sidewalks with Ozzy Osbourne. But, in my humbled opinion, no one is more metal than a teething baby.

Unless you can smile your way through pieces of your skeleton slowly jutting out of your mandible, you must bow down to the true kings and queens of rock 'n' roll: the teething babies among us, putting us all to shame one peep of newly-minted enamel at a time.