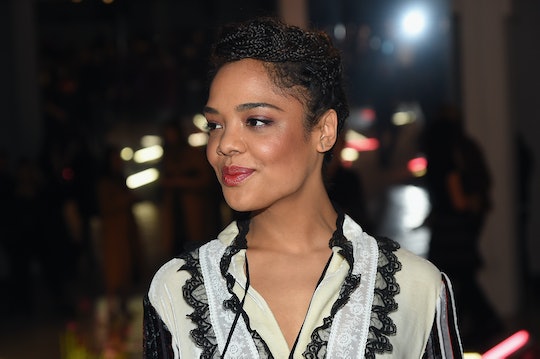 The new wave of strong female leads is a trend movie buffs should keep going. But, like most things in the world, it could be better. For example, Thor's Tessa Thompson is sick of "badass" female leads described by casting directors and honestly? She has a point. Being "badass" is not a bad thing at all, but the way that it's used to describe female characters rubs Thompson the wrong way. Like, a woman can't just be strong. She has to play to the male gaze, too. This is what bothers Thompson. The actress, who plays the Asgardian warrior, Valkyrie, in Thor, told the Los Angeles Times:

There’s one word I hate in all scripts in Hollywood at the moment in describing women, and that is the word ‘badass.’ That word has just crept into every script that is pushed around this town now. It’s a dumb male writer’s way of saying, ‘Ah, uh, she’s like, she, uh, she’s tough.’ Then straight after that it’s like, ‘She’s badass, but she’s got a beauty about her. And she’s sexy. Unconsciously sexy.

Ah, yes, the classic DGAF attitude and that "unconscious" sex thing. Like a woman is so intent on taking down her enemies in a bra top that she doesn't even have time to realize she's turning all of male co-stars on. Yawn.

There's nothing wrong with being fierce, tough, and sexy. But Hollywood runs the risk of creating just one more harmful stereotype by making sure all women are "badass" in the name of getting more female characters on-screen.

Being a badass can mean a lot of things. Like, moms who manage to keep their children alive on a day-to-day basis? Badass. Our culture runs the risk of rendering that word meaningless, especially if film studios insist on reproducing the same kind of character over and over again.

And being a badass superhero does not make one a feminist hero. Jeffrey Brown, an associate professor at Bowling Green State University, wrote in 2011 in a paper on the topic that:

Modern female characters are so thoroughly eroticized that it is nearly impossible to find a super-heroine or villainess that is not defined primarily by her sex appeal.

Which is exactly the point Thompson was making. Male writers and directors looking for a "sexy" protagonist don't get a feminist star just because they wrote a role for a woman who knows how to throw a punch. Even when the female characters are integral to the storyline, people often still focus on the woman's physical appearance. Being a "badass" is often still tied to a woman's ability to look hot instead of anything else. When was the last time you saw a female superhero that didn't play into old stereotypes about what's considered "hot or not?"

Sometimes things get played out, which, if anything, Thomson has a point about that.