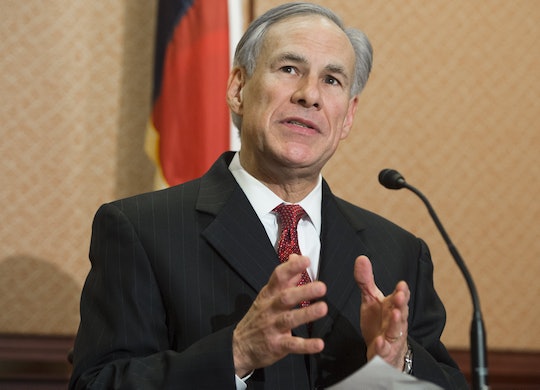 There is officially a mutiny when it comes to transgender bathroom laws. Joining eleven other states, on Tuesday, Republican Gov. Greg Abbott announced that Texas will sue the White House over its "bathroom bill" decree. Earlier this month, the Obama administration announced that all school districts would have to allow students in public schools to use whatever bathroom corresponded with their identified-gender, in response to North Carolina's HB2 law, which was deemed illegal by Attorney General Loretta Lynch under Title IX. Lynch urged the state to reconsider the bill at the risk of losing federal funding for schools. North Carolina promptly countersued the Department of Education.

Texas is joined in the suit by states like Alabama, Maine, Wisconsin, West Virginia, Oklahoma, Louisiana, Utah, Tennessee, and Georgia, all of which have joined North Carolina in discriminating against transgender individuals who wish to use a bathroom they feel comfortable using. Two school districts in Arizona and Texas have also joined the suit.

At the risk of sounding glib: "Only in America, people."

In the lawsuit, the states assert that "gender identity" doesn't fall under the jurisdiction of anti-discrimination laws like Title IX or VII, which they claim that the Obama administration keeps tweaking to its liking.

According to CNN, Abott has a history of wanting to take down the "king" as he so politely called him in a tweet on Wednesday. He's taken on Obama's executive orders on immigration, too, and the state is currently waiting on a ruling from the Supreme Court. It's kind of a big deal when states decide to take on the executive branch and the rulings from SCOTUS will determine the constitutionality of the executive orders for some time.

Voters should expect to hear a lot more about the various "bathroom bills" in the upcoming election. Although the lawsuit is steeped in Title IX details, the pushback about allowing transgender individuals to use whatever bathroom they identify with is steeped in a sort of hysteria that men, transgender or otherwise, will be able to enter women's bathrooms and somehow harm small children. During the primaries, many of the Republican candidates repeated this fear. Texas Sen. Ted Cruz ran on a platform supporting bathroom bills — local laws that prohibit transgender people from using the bathroom corresponding to their gender — saying that "predators" shouldn't be allowed in spaces with little girls.

But current crime records show that this fear is based on nothing more than people like Ted Cruz not understanding gender identity more than anything else. In fact, according to Vox, 12 states that don't have bathroom bills have seen no increase in attacks in bathrooms, especially from transgender individuals. Rather, transgender people more often face predators in bathrooms than anyone else.

This is the next big issue when it comes to LGBT rights and all Americans should be concerned about the outcome, no matter where they come down on the issue. In the meantime, we should also be semi-grateful that we don't have a king, and a system that supports states speaking up when they feel things are unfair. Whether they're right or not.