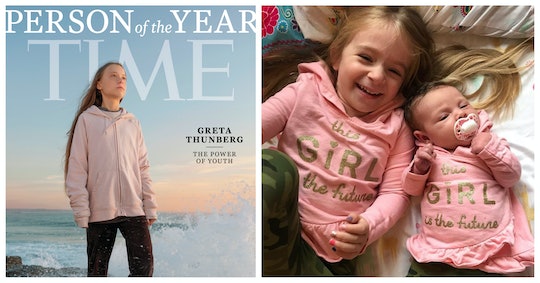 Thank You, Greta Thunberg, For Being What My Girls Need To See

I was around 9 years old when I read my first American Girl story. It was one of the books in the Samantha Parkington series, and it included Samantha's friend, Nellie, revealing to her what child labor and factory work was really like in 1904. In the story, Samantha becomes an advocate for child laborers, and the themes of social justice were not lost on fourth-grade me. In fact, all of the themes in the American Girl series (women's rights, classism, empathy) struck a chord. This was the '90s, when "girl power" was a literal anthem. Mind you, the revolution didn't extend very far — TIME spent the '90s naming people like Newt Gingrinch, Ken Starr, and Jeff Bezos its "person of the year." Which is why 16-year-old Greta Thunberg's Person of the Year title this year is much bigger than Samantha Parkington or Ginger Spice ever were.

Look, there's a million hot takes on Greta Thunberg festering in your Twitter timelines, and one of the most fired-up arguments is that Greta shouldn't be TIME's Person of the Year just because the grown-ups in her life can't get their sh*t together. They argue that she has no business being on stage talking about climate change, not because she doesn't know her stuff, but because she's a child, and children shouldn't have to do the work of adults. They say this, seemingly oblivious to the fact that Thunberg herself has accused the current generation of leaders of failing to act and stealing her childhood. Thunberg wishes it wasn't her, wishes kids didn't have to do the work of adults, but complacency of adults is nothing new. Children have long had to do the work of adults.

We call our children innocent and vow to protect them from the world, and then we call them resilient and try to push them out of their comfort zones.

Samantha Parkington, however fictional, took on the injustice of child labor, Malala Yousafzai faced down the Taliban when it banned girls from attending school, Mari Copeny, aka "Little Miss Flint" has kept the spotlight on her hometown — each time a child acts, it has little to do with proving themselves or trying to make a statement or going viral on social media. They do it because no one else will, so why not them?

Thunberg has reminded the world that they are underestimating "angry" kids. That they aren't paying attention to the power children actually wield, that they think kids aren't listening.

But they should, and kids are. And that's what I want my girls to see.

Because in 2020, kids don't believe that having a good childhood means pretending the world is a just and perfect place. They don't believe that they need to wait to grow up and wake up. They believe their power is real, and for all the blowback, they remain steady.

Greta has crossed oceans, entered summits, upturned entire rooms of men. She is innocent and protected, resilient and focused — she is a 'great many things,' as Jo March would say.

We call our children innocent and vow to protect them from the world, and then we call them resilient and try to push them out of their comfort zones. We tell them they can do and be anything, and then we tell them they should focus on being kids and enjoying their childhood. But Greta has crossed oceans, entered summits, upturned entire rooms of men. She is innocent and protected, resilient and focused — she is a "great many things," as Jo March would say, and it proves that when we search for leadership, it can look like her. It can look like an 18-inch American Girl doll. It can look like my girls.