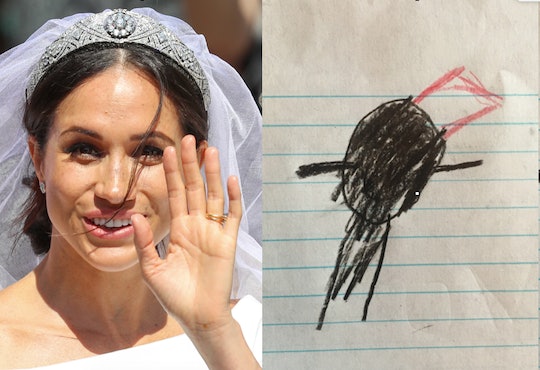 Thanks To Meghan Markle, My Daughter Is Drawing Princesses Who Look Like Her

In the months leading up to Trump’s inauguration, I feverishly tried to imprint memories of Barack Obama into my Black twins, who were then 3 years old. I was desperate that they remember when a man who reflected their beauty graced the highest seat in the land, before that memory faded away under the oppressive whiteness of MAGA politics. Saturday morning, though, I observed my 4-year-old daughter sit with rapt attention as she watched the Royal Wedding, where she saw a Black woman celebrated, loved, and honored; where she saw in Meghan Markle a "princess" who looks like her.

As a white mom to Black children, I am forever cognizant of how often they see faces that look like mine —not theirs — reflected back at them from too many leadership or honored roles. While we work to keep memories of the Obamas alive for our children, the first president they will likely remember in-office will be Trump, a man who speaks against their well-being and worth on a regular basis.

But Saturday, I watched Rev. Curry preach from a pulpit held by a family that for centuries kidnapped and enslaved their ancestors, in a land that was colonized and stolen from other oppressed people groups. My daughter told her dad, “That pastor is Black like me, not white like you!”

Her twin brother exclaimed, “He said Dr. King!” when the Reverend mentioned another one of their heroes. He sat in rapt attention when Sheku Kanneh-Mason took center stage, and asked me if our Alexa knew these songs. We tested it out, and she does. I am thankful to add another strong, talented Black artist to our daily shuffle list.

I told my daughter that for the first time in England, there would be a Black princess. Yes, just like Tiana, I assured her.

“There’s never been one before?”

“In African countries there are, and have been, for a long time. And we had Michelle Obama who is kind of the same for America. But not in England, no. The world is changing.”

She smiled as she skipped over to the table to begin drawing black princesses in crowns, and her brother ran off to play sword fight with some wooden meat skewers. They were drawn back to the TV again when the newlywed couple emerged from the church to the familiar bars of “This Little Light of Mine.” Gospel music, never a part of my childhood, is now woven into the fabric of our home and our diverse church. And now, my children have heard it played from inside one of the oldest white religious institutions in the world. They’ve heard it bursting forth from those doors onto a sunny May day, as newly Black royalty climbed into a horse-drawn carriage.

I was not sure, however, how this event would be viewed by the Black community. After all, the British monarchy is responsible for creating the institution of chattel slavery in America, for decimating African kingdoms through colonization, and so much more brutality. Any range of feelings from those who are the victims of this history would be expected.

I turned to social media and saw a range of responses, but mostly? Joy. Joy to the scale of my children’s joy, with a level of adult reflection that I found both educational and inspirational.

My friend Nia remarked on Facebook, “FAM. I’ve been a bridesmaid in three Black weddings, attended three times that many, and even if I rolled them all into one giant wedding meatball, they still wouldn’t be as Black as the royal wedding!”

Twitter did not disappoint either with its #royalweddingsoblack and #knuckifyoubuckingham hashtags.

As a white mom navigating these waters trying to raise proud, strong, pro-Black children, I am continually learning from the depth —and the wittiness — to Black Twitter.