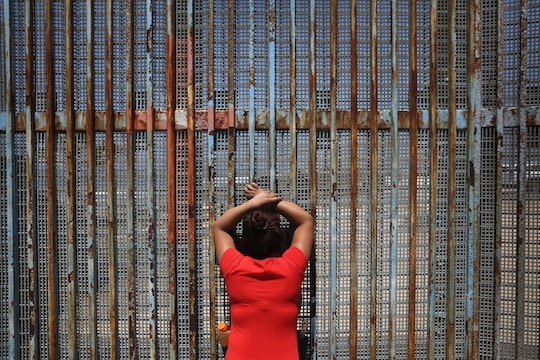 It's the little girl's arm I can't forget. Her little hand outstretched, still coiled around her father's neck from where she was holding on. Still trusting, still small enough to believe in a world where things will turn out in the end. That arm haunts me. That arm should haunt everyone, but the persistent thought in the back of my head that it might not haunt everyone haunts me even more. That awful photo of a drowned father with his daughter shouldn't have to exist for us to take action, but my fear is that even this won't be enough to make a difference. Click, click, click on past to the next horror and everyone can just go ahead and keep anesthetizing themselves against the reality that a man died crossing the Rio Grande with his daughter on his back trying to escape life of desperation and make it from Mexico to the United States.

On Monday, June 24, journalist Julia Le Duc captured the haunting image. Salvadoran father Óscar Alberto Martínez Ramírez dead on the shores of the Rio Grande at Matamoros, across the river from Brownsville, Texas. His daughter, Valeria, was still clasped to his side, her arm still coiled around his neck. Valeria was not quite 2 years old, Ramirez just 25 years old himself. And, according to NPR, the family was attempting to migrate into the United States.

The photo is horrific and personal and shocking. It shouldn't exist and it's difficult to look at it or feel comfortable sharing it in articles or on social media. Ramirez and his little girl are real people with real stories who already suffered enough... they do not deserve to have their tragedy glorified.

Neither do they deserve to be forgotten by the 24-hour news cycle. Because, if anything, this distressing photo acts as a sobering lesson as to exactly the sort of harrowing circumstances immigrants now face in order to seek asylum. The death of young Óscar Alberto Martínez Ramírez and his little girl should do just that. Or, rather, it better.

The photo of this lost, exhausted father and his little girl laying dead on the Mexican shore surrounded by discarded beer bottles and debris has been taken up as the newest symbol of the sort of dangers migrants seeking asylum now face, thanks to President Donald Trump's strict immigration policies.

As Le Duc reported in Mexican news outlet La Jornada, per Vox, Ramirez and his wife Tania Vanessa Ávalos were trying to seek asylum legally in the United States, as is their right. The couple had been held at a migrant camp in Mexico where they struggled to find enough food and grew tired of waiting months for an appointment to apply for asylum, so they tried to cross the river on their own with their little girl. As Le Duc reported for La Jornada, Ramirez crossed the Rio Grande with his daughter and made it. But when he went back for his wife, their 23-month-old came after him. He swam back for her and they drowned in the current.

It's so easy to point the finger at people trying to enter the country and tell them to go through official channels. Why take such a dangerous risk? Why? Because the Trump administration's immigration policies are making people more desperate than ever. In fact, the Trump administration has lowered the number of refugees allowed to seek asylum in the United States from 110,000 people per year under the Obama administration to just 30,000, according to The New York Times.

In the wake of that tragic photo of a father and daughter drowning, there has been a wealth of outrage and sadness. El Salvador's President Nayib Bukele told CNN he would ensure the family would be offered financial aid, while politicians like Democratic presidential hopeful Kamala Harris shared the photo and condemned the immigration policies that allowed it to exist in the first place.

"These families seeking asylum are often fleeing extreme violence. And what happens when they arrive? Trump says, 'Go back to where you came from.' That is inhumane. Children are dying. This is a stain on our moral conscience," Sen. Harris wrote on Twitter.

This family trying to seek asylum in the United States absolutely had a credible claim. The extremely violent street gang MS-13 has taken over much of the country, leaving citizens in terror for their lives, according to Rewire. Since the early 2000s, El Salvador has been considered one of the world's deadliest countries due to the drug trafficking, human smuggling, and homicides ravaging the area.

All I can say is this: I hope people — politicians, policymakers, everyday citizens — are genuinely galvanized to take a stand. I hope this horrible photo pushes people to make a difference. Because the thought that the deaths of this young father and daughter, so determined and full of hope for a better life, might just be a trending moment on Twitter is simply too rotten to bear.