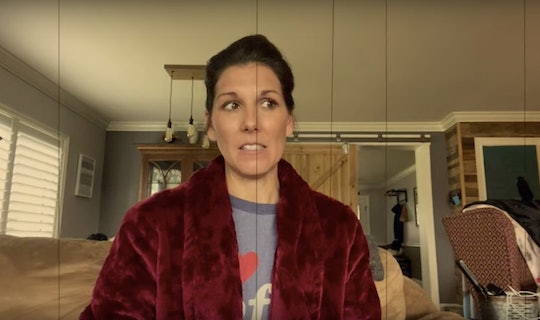 That Moment When You Realize You're The Breadwinner

The person behind That’s Inappropriate, Meredith Masony, is talking to me via video-chat in her studio when her husband comes clattering into the room. Once she sends him on an errand, a kid busts into frame. Lastly, her two dogs — one an energetic puppy and one a senior — clamor for her attention. Masony doesn’t break stride as she gives them directives on how exactly to get out of her hair, and I’m reminded of BBC Dad Robert Kelly, whose baby, toddler, and wife crashed his live interview — a moment that went viral for revealing the strings being pulled behind the scenes to keep career and family afloat.

With an audience of 3 million followers, Masony is publicly the person pulling the strings in her family, the primary breadwinner, and therefore part of a growing demographic of mothers who work full-time. According to the Center for American Progress, in 2017 nearly 70% of mothers worked for pay. A staggering 41% of mothers were the primary or only breadwinner for their family, either out-earning their partner, or bringing in the only source of income. Of those, some are self-made — creators of their own business or brand.

What is it like when you are it for your family? When keeping the lights on and food on the table relies solely on your income, on the unlikely career you’ve built? Despite the fast-growing demographic of female breadwinners, a Pew research study found that most Americans still view men as the financial providers, with an associated stigma where the reverse is the case. So women who succeed in building their own source of income aren’t only risking the stability of a traditional career trajectory, but taking on engrained ideas about who should be in the spotlight, and what a mother’s role in the family is. Romper talked to four powerhouse mothers who have founded online businesses about how they made it happen, and how those dynamics impacted them.

'Four hundred years ago, everybody worked together on the family farm,' she says. 'I feel like we have that modern day farm.'

Sometimes, scaling the business means your partner has to — or gets to — quit their job. This was the case for Laura Fuentes, who in 2011 launched Momables, a meal-planning and recipe website for busy mothers. In the early days of blogging, Fuentes was a mom to three young kids who left her corporate job to stay home, and began sharing her meal tips in her “spare time,” scare quotes hers. Momables, as well as her subsequent lifestyle website, began to actually make money. Her husband Eric, though, was missing out. A hospital CFO, he was gone 12 hours a day, five days a week. “He really missed an entire decade of our kids growing up, and I just always thought it was unfortunate,” says Fuentes. “He was getting short-changed in the day to day.”

They talked long term about him leaving his job to help her, but assumed it would take a lot of planning and saving. Then, one month, she earned twice as much as he did. He quit his job and took over the operations of Momables. Several years in, it’s a success. Fuentes has an office space away from the home, and works more traditional business hours. Eric is home during the day — he often does the school running or takes the dog to the vet, and works from coffee shops. “Everything is divide and conquer,” Fuentes says. “We leave work at work.”

The biggest benefit for the family has been working toward a common goal. “Four hundred years ago, everybody worked together on the family farm,” she says. “I feel like we have that modern-day farm. I know 100% he has my back at home and at work.”

Sometimes, it goes the opposite direction. Amy Bellgardt created her blog, Mom Spark, a decade ago, during the boom of the mommy blog. Married at the time, she is now divorced and lives with her 12-year-old son. Her 19-year-old son is away at college. “We went from a house of four to a house of two. I was being pulled in so many directions because of all the responsibilities. I just felt like I had no energy to be present because I had to think three steps ahead all the time.”

You think you have off during school hours, but you don’t really.

Two years post-separation, she’s finding her stride as the sole breadwinner for her family. “I tried a co-working space, but having to jump in and out to take my kid to appointments and such, I wasn’t utilizing it enough,” she says. “You think you have off during school hours, but you don’t really.”

She is a strong advocate of therapy, and going to stay in a hotel by herself once in a while. Her new venture, an Instagram account highlighting her forties at @my40life, offers a new focus, looking past the mommy blogger lens to the next thing.

Meagan Francis became the sole breadwinner for her five children after her 2016 divorce. “Being half of the income in marriage, I don’t receive child support,” she says. “I had to figure out how to support myself and the kids.” She’s managed to do so by growing the Life, Listened podcast network steadily over the last five years.

Francis has an audience of a quarter of a million listeners, mostly women, and also co-hosts The Mom Hour podcast and works with podcasters to grow and monetize their shows. Having no one available to take anything off her plate is difficult, but she’s found freedom in the autonomy her role gives her. “I like that the money coming in is mine. It’s my decision how much I want to work and earn. It’s my decision what lifestyle I want to afford and what I want to spend it on.” Her self-employed journey has been fraught with hills and valleys, but “I wouldn’t want to do anything else.”

For the first 10 years of marriage I completely enabled the behavior of ‘I’ll do everything and you don't have to do anything.'

For Masony, vlogger, podcaster, and woman behind the curtain in her home studio, building a business required her to step back from her role as supermom. “For the first 10 years of marriage I completely enabled the behavior of ‘I’ll do everything and you don't have to do anything,’” she recalls. “And then around year 12 or 13, I was exhausted from it. I can't even imagine if I was a single parent doing this. I want to whine about it, but I am not single... still, when you feel like you haven't seen him in days, shit has hit the fan, and you can’t keep up…” Once she decided to focus on her own needs and ideas, their marriage found a more egalitarian footing. Today, she runs That’s Inappropriate and Filter Free Parents, and toured the country in 2019 with a live show.

Masony’s husband Dave left his school administrator job nearly three years ago to help run the social media empire. He grocery shops and cooks, and is the primary parent when Masony is traveling.

“He has taken over some of the household duties because I am the reason the money comes,” says Masony. “He works alongside of me so that the machine can continue.”