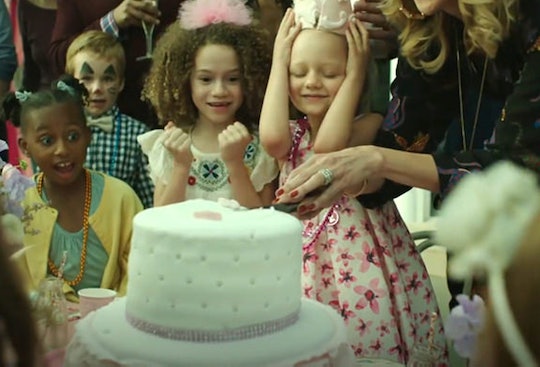 Admit It, That Pinterest Party Isn't For Your Kid — It's For Other Moms

It's going to be a banner year, threatens the handmade, monogrammed first birthday banner by the gift table, under the Pantone 1837 Blue helium balloons that spell out the birthday girl's name. If you thought a few cardboard party hats might suffice, think again. The Pinterest-inspired birthday party is riotous act of oneupmanship against other parents — like, do not attempt to enter the birthday-theme zone without a solid base of latte. You know the type of party — maybe you've even thrown this party — where no cupcake is just frosting-covered cake, but rather a perfectly formed Cookie Monster with a cookie hanging out of his mouth mid-bite. It's the stuff of fantasies and Kardashian holiday episodes. It's next-level hosting, and I'm here to call out the moms on it: that Pinterest party isn't for your kid, it's to impress the other moms.

I mean, sure, you want to give your child a memorable birthday party — and a custom-made Hungry Caterpillar lantern sculpture *will* do that. But I believe that at the point where your kid's birthday party has better set decoration and floral arrangements than my own wedding is where you have crossed the line. Your party favors are actual lunch boxes filled with toys? I want to know whose 529 plan we are spending, and what happened to giving out 5-cent super-bounce balls.

Head over to Pinterest, search "kid birthday party themes," and brace yourself for submersion in a sea of cupcake towers and party favors sure to blow your mind.

Where do we even get these ideas? The same place we got our obsession with ombre hair and Ugg boots in daylight hours: celebrities. Katie Holmes and Tom Cruise allegedly spent $45,000 on catering alone for Suri Cruise's second birthday party. I could think of a few things I'd rather spend that money on than gourmet fare that immediately dissolves in your stomach. Like, oh, I don't know. A college education for one of my kids. A couple weddings. Even a really, ridiculously nice car.

And Suri's affair didn't stop at an abundance of food. One thousand butterflies reportedly filled the room. Did anyone even ask the butterflies if they wanted to be put at the mercy of small people wielding sugar-covered fingers?

Granted, celebs have resources to throw around that most of us "regular" folk don't. They are afforded the luxury of throwing fancy parties with a soft financial cushion and actual party planners for the under-5 set.

But these extravagant celebrity parties set a tone for the rest of society — a goal even — to shoot for. Photos of these celeb kid birthday parties litter Instagram and Facebook feeds, encouraging us to push just a little harder for a party that "pops."

Some of us "regular" moms and dads are almost as intense in terms of our parties. Head over to Pinterest, search "kid birthday party themes," and brace yourself for submersion in a sea of cupcake towers and party favors sure to blow your mind.

With a mere million hours of party prepping, you, too, can throw your son a circus-themed birthday party with real carnival games and prizes, a popcorn machine and funnel cake. Why stop there? Maybe your unkempt, alcoholic uncle can act the part of carnie. Perhaps you can get some authentic horse smell at Party City.

Keep in mind when planning one of these Pinterest-inspired birthday parties that no regular snacks are allowed. All snacks must fit the theme, and should preferably be labeled with a cute name. No, those aren't rice crispy treats at the barnyard-themed party. Those are haystacks, you understand?

If you throw your daughter a mermaid-themed party, be sure that all balloons are purple and teal, and are situated on the wall so as to look like bubbles rising from the ocean depths.

I get it. It's cute. It's fun. It's amazingly creative. But let's not kid ourselves: it's not for our kids. It's for us. Unless the party is for is a teenager, the birthday kid is unlikely to appreciate all the details of their soiree.

My son will soon be turning 6 and my daughter just turned 2.

My husband and I have thrown a birthday party for them each year. All of the parties have been simple: store-bought cake. Dollar store decorations. Letting kids loose in a park playground with squirt guns. The parties earned rave reviews from not only my kids, but the parents and kids who attended, even without us renting a bounce castle.

We encouraged whole families to come and join the fun. Why not? We'd just pick up another pizza and another fruit bowl from the store.

Pinterest parties look awesome, but they're not my thing. I'm a working mom, and I just don't have the time, or to be honest, the interest in a million hand-crafted touches.

I do admire birthday parties where parents go all out. They accomplish their goal. I leave the party impressed, along with all of the other parents, I'm sure. It feels good to have people "ooh" and "ahhh" over our handiwork.

I personally know many moms who enjoy throwing themed birthday parties full of extras. Good for them, I say, genuinely. It's a great creative outlet. But it's not for the kids. It's for the moms and the mom throwing it. Both at the party and later when pictures are shared on social media.

As for me, I'll stick to my store-bought cake that might very well end up doused with a Super Soaker before anyone even has a slice.

And my kids will still have a happy birthday.

More Like This
The Morning Rush Is Parenting At Its Most Essential
Sex And Mom Guilt: When I Date Someone New, Am I Cheating On My Kids?
Dr. Jill Biden Just Delivered Some Frank, But Powerful, Advice On Motherhood
Reddit Applauds Mom Of Five Who Stood Her Ground & Left Sleeping Dad Behind