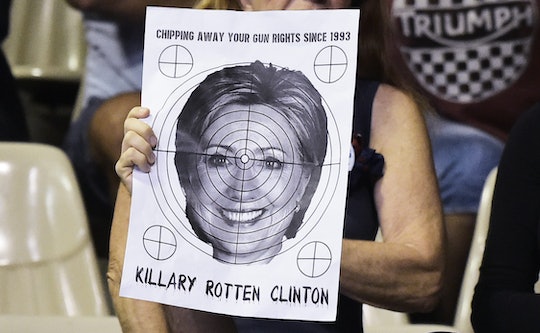 The 2016 Election Is 'The Hunger Games,' According To The Internet

Election night is upon us, guys. May the odds be ever in your favor. Yep, that's right. The antagonistic, pugnacious quality of the 2016 presidential election carries a whiff of Katniss Everdeen and her battle to survive, don't you think? Of course you do. Because the 2016 election is The Hunger Games, so sayeth the internet.

As Democratic presidential nominee Hillary Clinton and her political opponent, GOP presidential nominee Donald Trump finally get to the end of their campaigns, the world must take a moment to acknowledge all of the ways this election has aped The Hunger Games. Remember all of the original "players" (also known as the presidential candidates) who have slowly been cast aside to allow the final contestants to do battle for our viewing pleasure?

OK, maybe Americans don't expect them to kill each other like they do in The Hunger Games and yes, Hillary Clinton and Donald Trump did choose to vie for the presidency. They didn't have to fill out ballots (although ballots — another coincidence), and they aren't exactly children. But still. Clinton is Katniss Everdeen, a tough chick who gets the job done and doesn't concern herself with making people like her (although some of us really, really do) and Trump? Sorry Trump, but in our world you might be President Snow. Or possibly Effie Trinkett; Elizabeth Banks, who played Trinkett in The Hunger Games, did point out some similarities between Trump and Trinkett in her speech at the Democratic National Convention in July. Just saying.

Some of you know me from The Hunger Games, in which I play Effie Trinket — a cruel, out-of-touch reality TV star who wears insane wigs while delivering long-winded speeches to a violent dystopia. So when I tuned in to Cleveland last week, I was like, ‘Hey! That’s my act.'

Banks wasn't the only celebrity who noticed the similarity; Stephen Colbert briefly crashed the Republican National Convention in July dressed as Caeser Flickermann, the flamboyant host from The Hunger Games. He was quickly ushered offstage, but the video went viral. Flickermann would have loved it.

Voters have taken to the internet to point out the similarities between this election and The Hunger Games as well.

The sun comes out (eventually) and the right woman wins (of course). Boom.