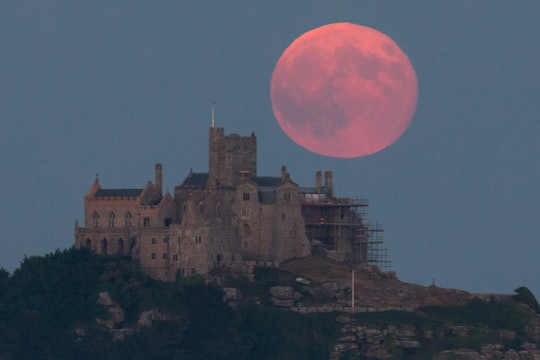 June's Full Moon Is Sweetly Named Strawberry Moon, & Here's How To See It

In the early morning hours on Monday, June 17, the full moon will appear. This special mid-June moon marks the end of the spring season and has gone by many names throughout history, but the most common name ⁠— Strawberry Moon ⁠— comes from the Main Farmer's Almanac, according to NASA. Yep, the so sweetly named Strawberry Moon 2019 is coming, and here's what it means.

From Saturday night on June 15 until the morning of Tuesday, June 18, the moon will appear visibly full from our view here on Earth, despite the peak fullness occurring at approximately 4:31 a.m. on Monday, June 17, according to NASA. The occurrence of a Strawberry Moon is an ideal time for observing changes in the celestial patterns of the night skies, especially if you're looking to observe certain planets.

If you're looking for Mercury and Mars on the night of the Strawberry Moon, they'll be easy to spot right next to each other. The planets will appear just a degree apart on the evening of June 17, with Mercury on the right and Mars on the left at 5 degrees west-northwest, with Mercury appearing as the brighter of the two. The two planets will appear even closer together on the following evening at just less than a third of a degree apart, according to NASA.

So, in addition to seeing some neat planet movement going on, what does the Strawberry Moon mean, exactly? Well, that depends on when and who you ask.

Known as the last full moon of spring, the Algonquin tribe coined the phrase "Strawberry Moon" to mark the short window of harvest for strawberries in the northeastern part of North America, and it was first published in the Maine Farmer's Almanac in the 1930s, according to NASA. However, in Europe, the moon has historically been referred to as a Mead Moon, or Honey Moon.

Researchers still aren't exactly sure whether or not the term Honey Moon is connected to the term "honeymoon" that is used to describe that oh-so-sweet period of time when a couple is first married and can't keep their hands off of each other, but they speculate the two could be related due to June being a traditional month to marry in. However, it is documented in some writings that the term Mead Moon refers to the June full moon, as this is when the honey used to make the fermented drink mead was sweet enough to be harvested to create the concoction, according to NASA. By either definition, the sweet-factor cannot be denied.

Another European name historically used to refer to the full moon that occurs mid-June is Rose Moon. This is said to be because of the rose-like red color that the moon gives off thanks to its position in regard to the Earth and Sun at this time, according to NASA.

NASA researchers have also given this moon a nickname of their own. The Lunar Reconnoissance Orbiter (LRO) Moon is a term coined by NASA in reference to the LRO spacecraft that was launched toward the moon 10 years ago this June.

No matter what name you refer to it by, the full moon happening in the coming days is sure to be spectacular. If you happen to be outside, glance up to see a display of bright planets, a rosy full moon, and see if you can come up with your own moniker for the 2019 Strawberry Moon.