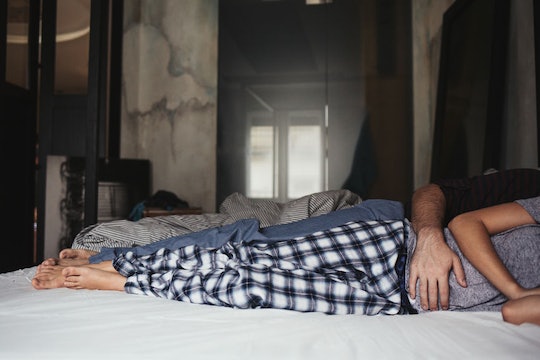 These Are The Best Sex Positions If You Want A Girl, *Not* According To Science

There are so many, many myths surrounding fertility and conception, it's tempting to just dismiss all tips and tricks potentially falling under the category of "Old Wives' Tales" — but in doing so, you run the risk of ignoring some potentially helpful information (potentially helpful if not backed up by an abundance of scientific evidence, that is). Take, for example, the question of whether or not there's anything outside of a laboratory that you can do to influence the gender of the child you're trying to conceive. Are there really, say, certain sex positions to conceive a girl, if that's your goal? That all depends... mostly on the person you ask.

It's not just friends and family who can be expected to give you completely different opinions on whether a particular method of conception is fact or folklore, either. Even experts have a hard time agreeing on this stuff.

As Popsugar reported, Dr. Landrum Shettles claimed that his landmark "Shettles method" resulted in a 75 percent chance of "having a child of the desired sex." Three specific positions were designated for couples hoping to have a daughter, all of which allowed only for shallow penetration. Following the doctor's logic, the X-chromosome sperm that produces girls swims slower than Y-chromosome sperm, but it's more resilient and "can survive in harsher environments for up to five days." A longer journey is more the territory of the X-chromosome... and slow and steady wins the race, so to speak.

It all sounds plausible enough, particularly to these non-scientist ears, but there's one very good reason to be skeptical, as Popsugar clarified: "There is no scientific evidence to confirm Shettles's theory."

Indeed, "there is no scientific evidence" is the most common opinion among experts.

"It’s a myth, your chances are about 50/50 for either gender baby if the pregnancy happens through intercourse," reproductive endocrinology and infertility specialist Dr. Vitaly A. Kushnir with Neway Fertility in NYC tells Romper.

"The most reliable way to select the sex of the baby is to do in vitro fertilization (IVF) with preimplantation genetic testing (PGT)," he adds.

Naturally, IVF costs quite a bit of money, while switching up your routine in bed costs nothing at all. So it's perfectly understandable if you want to give some of the most popular options a try.

The first shallow penetration-friendly position recommended by Shettles is easy enough: Good old-fashioned missionary. And I'm not kidding about the old-fashioned part, either. As Popsugar cautioned, in keeping with the Shettles protocol, "you shouldn't even try to spice it up: lie on your back and keep your legs planted, because if you wrap them around your partner's waist, you're inviting deeper penetration." Well, that's... limiting. But the goal here is a girl baby, not a super spicy date night, so, whatever.

Another position recommended by Dr. Shettle to limit the depth of penetration is spooning, according to BellyBelly. Lying on your side, "have your partner enter you from behind... The position of your legs while spooning helps to keep penetration shallow." (Have you noticed that these positions are pretty low-effort, as far as your role in the whole interaction goes? I don't think there's a connection, but... bonus!)

Alas, the last position considered useful in producing girl babies by Shettles requires significantly more work on your part than the others. And as BellyBelly pointed out, this position is also recommended for conceiving boys... it's what you do while you're in it that determines which way the gender pendulum will swing. The position, if you haven't guessed, is straddling: You can use this vantage point to control how far penetration goes (not far at all for a girl, pretty far for a boy).

What happens with a medium level of penetration? How shallow is too shallow?? The best part about tips which are neither proven nor disproven is that a lack of scientific evidence also means a level of freedom from all the scientifically specific rules that usually go along with these things. In other words, don't sweat that stuff. Just see what happens... and have fun!

More Like This
6 Sex Positions To Reduce Leg Pain
The Best Couch Sex Positions
Here's How To Keep Your C-Section Incision Dry
What Is RSV?