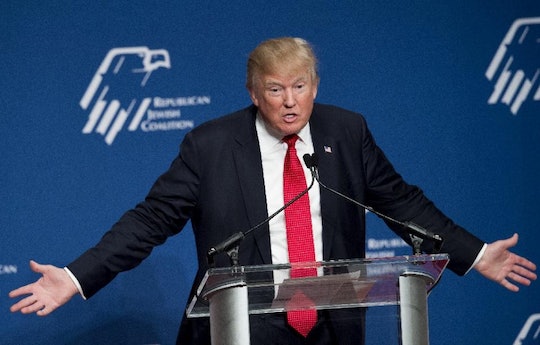 The 4 Worst Things Trump Has Said About Muslims, So Far

Republican presidential candidate Donald Trump is notorious for being outspoken. Although that's acceptable under freedom of speech, his comments have to be taken much more seriously now that he's running for president (and could possibly be our next leader.) And the truth of the matter is, a lot of the time, his comments are offensive. One area where there is particularly apparent is in Trump's beliefs about Muslims who are entering or living in our country.

Trump's comment on the Muslim community, which tap into anti-Muslim sentiments among some Americans, have been causing a stir and angering and hurting many people. Most recently, Trump proposed a ban on Muslim immigrants, which sparked outrage from the Democratic party as well as Trump's fellow Republican party nominees. And his comments aren't only offending the Muslim-Americans who help build this country, but also non-Muslims who call Muslims their friends or those who simply know that not all people who follow Islam are radicals. If you haven't been following his campaign, here's a roundup of the very worst things he's said about Muslims so far.

1. "Donald J. Trump is calling for a total and complete shutdown of Muslims entering the United States until our country's representatives can figure out what the hell is going on. We have no choice."

Yes, he said this while speaking in third person. Unsurprisingly, he drew comparisons to Hitler after releasing this statement. Also, remember that dark period in American history during World War II when Franklin Delano Roosevelt delivered an executive order that sent Japanese-Americans to internment camps? Yeah, let's not repeat that mistake again and violate human rights.

Trump went further, implying that his fellow Americans agree with his stance. But according to a recent CBS News poll of about 1000 adults nationwide, 6 in 10 Americans don't even believe the U.S. should temporarily bar Muslims from other countries from entering the U.S.

2. "Obama said in his speech that Muslims are our sports heroes. What sport is he talking about, and who? Is Obama profiling?

Following President Obama's Oval Office address, on Dec. 6, Trump took to Twitter in the hopes of contradicting Obama's statements. But what he did was make himself look ignorant. Perhaps The Donald should check out, The Washington Post's roundup of Muslim sports heroes.

In a Nov. 22 exchange with George Stephanopolous on ABC's This Week, Trump spoke about how Muslims reacted to the 9/11 attacks. And, again, his facts were off. CNN reports that police, numerous publications and politicians are disputing Trump's claims of 9/11 celebrations, claiming them false. Several political figured took to Twitter that night to dispute Turmps claim, including Mayor Steven Fulop of Jersey City former governor of New York, George Pataki:

4. "I want a database for the refugees that — if they come into the country. We have no idea who these people are. When the Syrian refugees are going to start pouring into this country, we don't know if they're ISIS, we don't know if it's a Trojan horse. And I definitely want a database and other checks and balances. We want to go with watchlists. We want to go with databases. And we have no choice."

Trump dropped this lovely quote in the same interview when asked whether he was ruling out having a database on all Muslims. Though it sounds like Trump just wants to be overly cautious about who the U.S. allows into the country, it's important to note that Muslims are not all potential threats to the country, so let's not treat them that way off the bat.