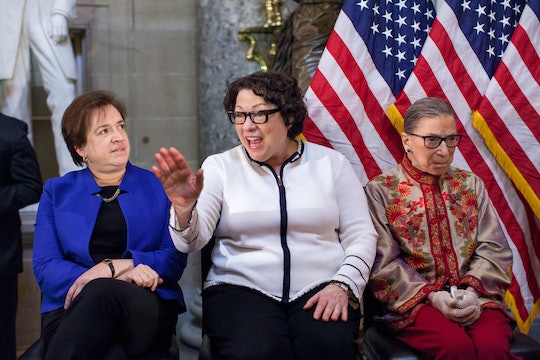 Forty years after Roe v. Wade affirmed women's Constitutional right to access abortion, the Supreme Court is once again facing a decision that could strip millions of women of their right to abortion through state regulations designed to run clinics out of business through onerous regulation. Here are the best quotes in the Texas abortion case from the Supreme Court's fearless women.

The case, Whole Women's Health v. Hellerstedt, just had oral arguments on Wednesday in front of SCOTUS, and never has there been a clearer demonstration of why having women on the bench is so important. And we don't just have any women, Justices Ruth Bader Ginsburg (Notorious R.B.G.), Elena Kagan and Sonia Sotomayor showed up for work yesterday ready to wage war on behalf of everyone who has, or loves someone, with a uterus. And it was magnificent.

At issue is the requirement that Texas abortion clinics meet the same standards as Ambulatory Surgical Centers (ACS) and that doctors who provide abortion services have hospital admitting privileges, restrictions which have effectively closed half of the clinics across Texas. According to the Center for Reproductive Rights, which has taken up the case on behalf of one such clinic, Whole Women's Health, the regulations will ultimately shut down three-quarters of abortion clinics across the state. Medical experts widely agree that abortion is a low-risk procedure and that the intent of the regulations are about restricting abortions — not protecting women's health. In fact, the American College of Obstericians and Gynecologists and the American Medical Association both weighed in on the case and said in a brief submitted to the court that, "Abortion is a very safe procedure, and complications requiring hospital admission are extremely rare."

There's no question the women of the Supreme Court clearly understand what's at stake and are ready to take on Texas and its disingenuous claim that the regulations are about improving women's heath care rather than stripping away the rights of those women to access health care by going after the clinics that offer services, including abortion.

1. Justice Kagan On The Practical Impact Of The Regulations

“Is it right,” she asked Stephanie Toti, attorney arguing for the Texas clinics, “that in the two­-week period that the ASC requirement was in effect, that over a dozen facilities shut their doors, and then when that was stayed, when that was lifted, they reopened again immediately?” Toti agreed, according to the Court brief. “It's almost like the perfect controlled experiment ... as to the effect of the law, isn’t it? It’s like you put the law into effect, 12 clinics closed. You take the law out of effect, they reopen?”

Under Texas laws, the medication used in medical abortions, which are often preferred over surgery, must be taken at the clinic rather than at home. A patient has to take two pills on two separate days, so the regulation requires the woman make two separate visits to a clinic. This is a serious burden for women, particularly if they're being forced to travel hundreds of miles to the closest clinic. Sotomayor seemed like she couldn't believe what she was hearing.

“I'm sorry. What? She has to come back two separate days to take them? Sotomayor said. "When she could take it at home, it’s­­ now she has to travel 200 miles or pay for a hotel to get those two days of treatment?”

4. Justice Ginsburg Is Not Impressed, Generally

"But what is the legitimate interest in protecting their health?" Ginsburg asked. "What evidence is there that under prior law was not sufficiently protective of the women's health? As I understand it, this is one of the lowest-risk procedures ... as far as we know, this is among the most safe, the least risk procedures, an early-stage abortion."

5. Sotomayor Joins In On Keller

“According to you, the slightest health improvement is enough to impose on hundreds of thousands of women.­­ Even assuming I accept your argument, which I don't, necessarily, because it’s being challenged, but the slightest benefit is enough to burden the lives of a million women. That’s your point?”

6. Then RBG Tags Back In

“I can't imagine. What is the benefit of having a woman take those pills in an ambulatory surgical center when there is no surgery involved?”

When compared to other surgical procedures abortion is far safer than other surgeries being performed under far less regulation, like colonoscopies and liposuction. In fact, patients are four times more likely to suffer a complication from a colonoscopy than a first-trimester abortion. Incidentally, in Texas, clinics that perform colonoscopys and liposuction don't have to meet ASC standards.

"You're not really contesting that there are greater complications in abortion facilities than there are with a great deal of medical procedures that do — that are not subject to the same standard of regulation," Kagan said.

9. Justice RBG Bottom Lines The Heart Of The Argument

"But this is about ­­… a woman has a fundamental right to make this choice for herself, “ Ginsburg said.