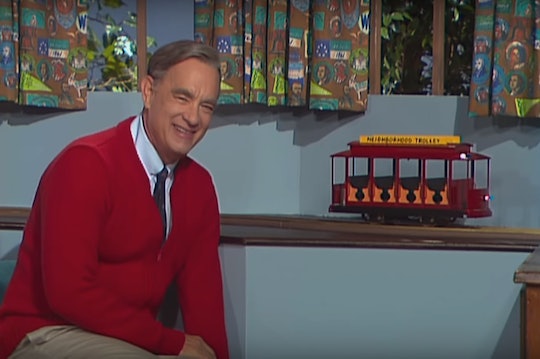 The 'A Beautiful Day In The Neighborhood' Trailer Pays Tribute To Mr. Rogers

Mister Rogers' Neighborhood aired on PBS from 1968-2001 and starred Fred Rogers as the soft spoken minister-turned-children’s TV host and eventual icon. So chances are, he was at least a small part of your childhood. He started the show by arriving home and talking to the camera, directing his greeting at the millions of children watching from home.

Each episode would focus on a theme for Mr. Rogers to teach his young viewers about, and while they got to watch him with his human supporting characters, the real fun came whenever Mr. Rogers visited the Neighborhood of Make Believe.

Young viewers looked forward to visits to the kingdom of puppets, which featured now iconic King Friday XIII and Henrietta Pussycat, which are both shown in the movie’s trailer. Because of the effortless way Mr. Rogers navigated through the show and spoke to his viewers, his show was a timeless educational program that kids of all ages could appreciate. My kids can watch all of the reruns they want of Mister Rogers' Neighborhood, but nothing compares to growing up watching new episodes throughout the week.

If the trailer for A Beautiful Day in the Neighborhood doesn't immediately turn you into a blubbering mess, then you might not have kids who typically turn you into a blubbering mess whenever something even remotely sentimental is involved. But if you grew up on Mr. Rogers like I did, then you can appreciate the way Tom Hanks captures the genuine personality and the care that Fred Rogers put into his program.

The movie follows some of the success of the show that made Rogers a household name, but it’s also based on true events — capturing a friendship that blossomed between Rogers and a journalist, Tom Junod. Junod was tasked with writing a profile on Rogers and got to know him on a personal level in the process.

The movie introduces Rogers from Junod’s perspective and shows the journalist who Rogers was when the cameras stopped rolling. Which, it seems, was exactly the person you saw when the cameras *were* on. Junod wrote in his 1998 Esquire profile of Rogers that during their time together, Rogers forced him to look at himself and his own life.

"There was an energy to him, however, a fearlessness, an unashamed insistence on intimacy," Junod wrote. "And though I tried to ask him questions about himself, he always turned the questions back on me." In the trailer, you can see the way Rogers tried to get to know his interviewer despite being the subject of the article himself.

Growing up watching the show myself, I didn't think about who Rogers was outside of the show or the fact that, despite having his cardigan and sneakers in the living room set, he didn't actually live there. But he seemed to always truly care about the kids watching from home. About me.

As an adult, I am a mom who gives her son plenty of screen time on his iPad, even if most of it is spent watching YouTubers play video games. But it’s also important to me that other times, he watches something of more value, which to be honest is harder to come by unless you have toddlers.

A Beautiful Day in the Neighborhood, which premieres in theaters on Nov. 22, won't bring back the show that a lot of us grew up on, but it will bring back memories of Lady Elaine Fairchilde and her puppet friends and remind you of the man who first taught you about loving and accepting yourself. I just wish my kids could experience it the way I did. I'm not crying, you're crying.