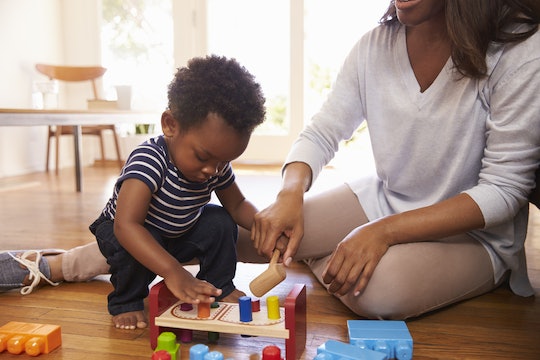 If you've already started holiday shopping for the young kids in your life this year, you know that there are an overwhelming number of options when it comes to toys. For those looking to help whittle down your shopping list, the American Academy of Pediatrics (AAP) has got you covered with an important recommendation. In fact, the AAP's advice for choosing the best toys for your kids makes a lot of sense, but may not be something every parent would think of.

The AAP's latest report, published in the AAP News & Journals Gateway, is titled: "Selecting Appropriate Toys for Young Children in the Digital Era." For the report, the AAP looked at some of its recent reports studying "play, media, school readiness, toxic stress, literacy promotion, injury prevention, toxicology, and poverty" as noted in the AAP's summary of the new report, and the group concluded that simple, non-electronic toys make the best gifts.

In the study, the AAP explained that traditional toys are often the best for kids, because they "provide opportunities for children to use their imagination to create the toy use, not the other way around."

Furthermore, the AAP advises choosing a toy that will "grow with the child." Toys that are made of simple materials like wood will last forever, while most electronic toys will eventually be outgrown or stop working.

Additionally, the AAP noted that the point of toys is to "foster interactions with caregivers, encourage exploration and problem-solving, and spark the child’s imagination." It's much easier to bond over a tangible toy than an electronic game.

"Keep in mind that toys are not a substitute for warm, loving, dependable relationships," the AAP added. "Use toys to enhance interactions between the caregiver and child rather than to direct children’s play." To help foster further creativity and supplement toy time, the AAP recommends utilizing children's books, which can easily be found free of charge at libraries.

The report shared several types of toys that would fall under the traditional category:

The AAP isn't the first to make such a recommendation. Dr. Sharon Saline, Psy.D., clinical psychologist, previously explained to Romper that "while electronic toys can be compelling and educational with their lights, sounds, letters, numbers, and moving images, they don't foster two important aspects of play for young children: imagination and connection."

She continued, "Young children benefit from the neurological growth that imaginary play with simple toys offers them... These moments help them integrate observations from daily life into new, creative ideas and behaviors."

In addition to looking for toys that are not electronic, other things to keep an eye out for are whether or not a toy might promote stereotypes regarding gender or race, the AAP noted. And on top of that, now may be a good time to limit your child's screen time.

The AAP recommends keeping screen time at less than 1 hour a day for children 2 years through 5 years of age, and zero screen time for in children under 2, adding that the "use of media together with caregiver interaction is essential to minimizing adverse media effects on the young mind," meaning that supervision is key. And as kids grow past 5 years of age, it's important to teach your kids healthy media-consumption habits.

Dr. Jenny Radesky, the lead author on the AAP's guidelines on media and children, shared how she takes screen time restrictions to the next level under her own roof in an interview with NPR. "I try to help my older son be aware of the way he reacts to video games or how to interpret information we find online," she told NPR, adding that she will teach him how games asking the player to make purchases are manipulative.

So, exactly why is it important to limit kids' exposure to electronics? The report cited a another AAP study titled, "The Importance of Play in Promoting Healthy Child Development and Maintaining Strong Parent-Child Bond." The study claims: "In sharp contrast to the benefits of active, creative play, there is substantial evidence that excessive screen time has adverse effects."

Additionally, The Lancet Child & Adolescent Health published a study in September titled "Associations between 24 hour movement behaviours and global cognition in US children: a cross-sectional observational study." The study's authors found that a combination of decreased screen time, proper sleep, and healthy physical activity "was associated with superior global cognition," which highlights "the importance of limiting recreational screen time and encouraging healthy sleep to improve cognition in children."

Basically, you can't go wrong with traditional, simple toys, games, and books. Not only do the experts think that route is better for kids, but it's also often easier on the wallet. Win-win!