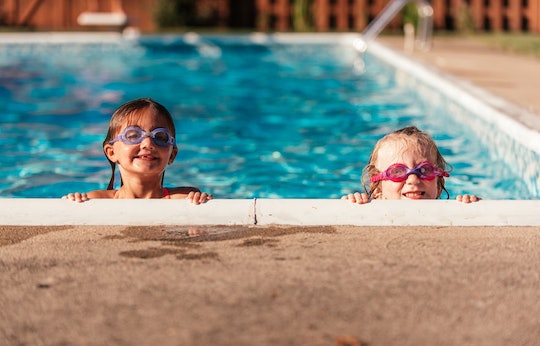 The AAP's New Drowning Prevention Recommendations Are So Important

Did you know that drowning is the leading cause of unintentional death for children ages 1 to 4? It's a scary statistic to think about, for sure. But it's true. In fact, every year, nearly 1,000 children are killed as a result of drowning. Which is why the AAP's new drowning prevention recommendations are so important.

On Friday, March 15, the American Academy of Pediatrics (AAP) revealed its updated advice concerning drowning prevention. “Drowning is the single leading cause of injury-related death among children ages 1 to 4,” said Dr. Sarah Denny, lead author of the policy statement, in a news release. “Many of these deaths occur when children are not expected to be swimming or when they have unanticipated access to water. Toddlers are naturally curious; that’s why we must implement other strategies, such as pool fencing and door locks.”

Something that might surprise many people is the second age group that's at highest risk for drowning: Teens. Every year, roughly 370 children between the ages of 10 and 19 drown. “Adolescents can be overconfident in their swimming abilities and are more likely to combine alcohol use with swimming — compounding their risk significantly," Denny explained. "Children of color, especially African American teens are especially at risk.”

In its new policy statement, the AAP offers strategies to protect children during all stages of their lives. (This new information will also be published on the AAP's website for parents, HealthyChildren.org.) Recommendations include:

According to the news release, a subject panel presentation was held on March 16 in Itasca, Illinois, during which leaders of the AAP gathered for an annual leadership conference. Families who have lost a child to drowning — including Olympic skier Bode Miller, whose toddler daughter, Emmy, died this past summer — shared their experiences at the conference, as well.

If you remember, Bode and Morgan Miller spoke out about their tragedy in hopes of spreading awareness about drowning. "There's not a day that goes by that I don't pray for the opportunity to go back to that day and make it different," Morgan told Today's Samantha Guthrie. "But now we have this opportunity to make other parents' days different." She added:

We have the choice to live our days with purpose, to make sure that no other parent has to feel what we're feeling.

Considering the alarming number of children that continue to drown each year, it makes sense the AAP would want to emphasize prevention education. Because it can happen so fast. And no parent should have to experience the heartache and guilt of losing a child to drowning.

More Like This
Everything Parents Need To Know About Monkeypox
How Hot Is Too Hot For Babies? Experts Weigh In
6 Mindfulness Activities For Kids
15 Adorable CoComelon-Themed Costumes You Can Buy Or DIY