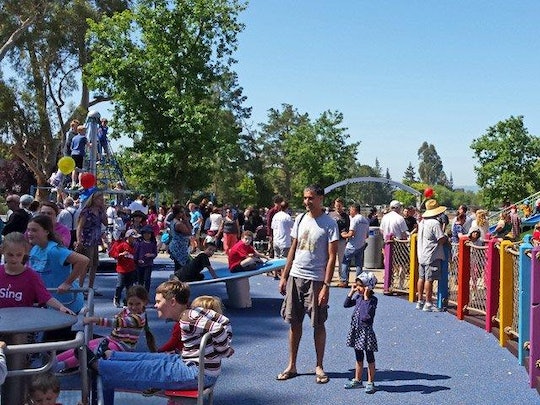 Courtesy of the Magical Bridge Foundation

Why Families Travel Hundreds Of Miles To Visit This Playground

Families of all different abilities drove hundreds of miles to visit Barbara Butler’s first adaptive play structure, The Magical Bridge Playground, opened in Palo Alto in 2015. Butler, an artist, had been designing and building custom play structures from her California workshop for 30 years, but nothing got quite this response. “It didn’t stop for days and days, weeks and weeks,” she says. “That’s when we realized this just wouldn’t be a one-time thing we built.”

More Like This
Tips From Neurodiversity Therapists That Help All Kids Feel Safe And Regulated
These Couches Are Perfect For Climbing If The Nugget Couch Is Sold Out
18 Best Sand Toys In 2021 For Babies, Toddlers, & Kids
Best Montessori Learning Towers: 11 Kitchen Helper Stools For Toddlers

At first glance, Butler’s playgrounds might not appear visually much different than many other play spaces. There are ramps leading to each area, and a variety of ways to descend the sliding hill — scooting down the grass, whooshing down over a track of rollers, or zooming down a metal slide ending in something Olenka Villerreal, one of the moms who led efforts to develop the playground, has dubbed the “dignity landing,” a spot to scoot to the side. Sliders have the space and time to get up, be assisted back into their adaptive equipment, or just have a moment to recover.

For children with visual disabilities, surface changes indicate that they are entering a different area (similar to the raised bumps that indicate approaching a crosswalk). Information poles have braille and pictorial descriptions of what each area is for. These small touches have a huge impact for kids with disabilities.

Butler credits Villerreal and another mother, Jill Asher, with making the park happen, and also influencing the design. “I build the playhouses, but they thought of everything,” says Butler. “They really try to involve as many people as possible — with as many backgrounds and needs as possible — in the process.”

It’s not a ‘special needs’ park. It is just a park that doesn’t put up barriers.

One in 4 Americans lives with a visible or invisible disability, as Magic Bridge points out, and they were all considered in the design. “All the spaces we built are for kids and adults, those in wheelchairs, walkers, those with sight and hearing disabilities, autistic people — as many people in the community as possible.”

Many newer playgrounds are ADA compliant, meaning they meet the basic accessibility standards set by the Americans with Disabilities Act. (Most older playgrounds do not come close to meeting these standards.) What Butler and the Magical Bridge team have set out to accomplish is well beyond the ADA. “The bar is really low, for adaptable playgrounds,” says Butler. “It was written to try to help a little without stopping new playgrounds from being built due to non-compliance.” She stresses the importance of inclusion in her designs: “It’s not a ‘special needs’ park. It is just a park that doesn’t put up barriers.”

What are the basic standards of an ADA-accessible playground? Some stipulations are smooth paths and ramps that are wheelchair accessible, play equipment at a variety of heights, and adaptive swings for larger children without the trunk control for a standard swing.

At the newest playground, Butler is exploring making retreat huts for autistic individuals or those with general sensory needs. “They can go into the little hut, peek out, and regroup and figure out what they want to do.” Butler and her team have conducted a lot of usability tests with disabled kids and adults to make sure the parks have as few barriers as possible, and truly include everyone. High school kids sign up to help people navigate the park, and generally encourage and integrate everyone.

This space has made it not just acceptable but it’s actually made it awesome to be able to include kids with different abilities.

Magical Bridge has been inundated with phone calls from folks who want to find out how to start the process in their city. When the sawdust settling and the paint drying on the latest addition to the Magical Bridge family in Redwood City, California, Butler has some time to sit back and reflect on the moments that really struck her. One in particular stands out to her, at the opening of the Palo Alto playground.

She was inside the playhouse watching kids play inside the “cafe,” pretending to sip coffee at the tables. “It was so much fun just to sit and watch the kids come up and hang out ... and I could see them engage in imaginative play with others.”

For all the design specifications, that is what the playgrounds are really about, she says. “This space has made it not just acceptable but it’s actually made it awesome to be able to include kids with different abilities. They play together, and they cherish each other with all of their varying abilities.”