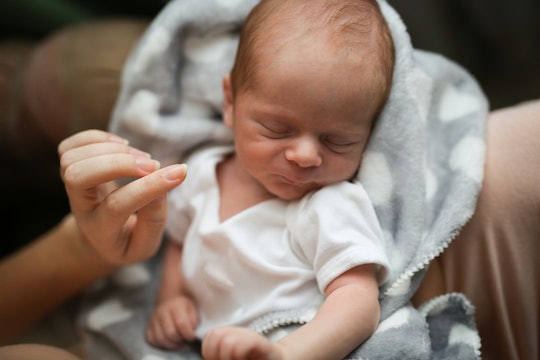 These Exact Pressure Points Will Put Your Baby To Sleep

Dealing with a baby who just refuses to go to sleep can be incredibly frustrating for a parent — not to mention exhausting. If lullabies, white noise, sleep sacks, swinging, and swaddling have all failed you, you might want to try your hand at acupressure. With a little practice you should be able to figure out which exact pressure points will put your baby to sleep.

I spoke with Ashley Flores, a licensed acupuncturist, to learn more. Acupuncture and acupressure are based on the same principles, and go back thousands of years in traditional Chinese medicine, according to Verywell Family. The theory goes that energy flows through the body in lines called meridians. There are various spots where meridians connect to organs, and these points are where pressure should be applied (using needles in acupuncture, or fingertips in acupressure).

Flores says there are a couple of different areas of a baby's body that you can work on using acupressure to help them get a better night's sleep. One of those points is right between the eyebrows — a spot often nicknamed the sleep button. "Just a really gentle stroking on that point is really calming for babies,” says Flores, who's used the technique on her own kids. “I recommend using a very light pressure. Just a little stroke with the fingertip going down toward the nose.” You don't have to do it for very long, either. "Maybe 30 seconds, or up to a minute for older babies," Flores explain. It should calm them down enough to drift off to sleep.

You can also try gently working a baby's back to help them settle down, according to Flores. Using only your thumbs, press on either side of the spine — you should be about a thumbs-width or two away from the spine itself. "Press for a few seconds at the top and then move down about an inch and press for another few seconds.” Start just above the spin, and work your way down to an inch or two below it. If you're nervous about how much pressure you should use, a good rule of thumb is to just be very gentle and pay attention to your baby's reaction. "They should enjoy it," Flores says.

Tummy troubles are sometimes at the root of sleepless nights for babies. Acupressure can potentially help there, too. “For babies we use rubbing in a circle in the palm of the hand. It’s really important for settling digestion, and I know that’s an issue for a lot of babies having a hard time sleeping — it’s because they’ve either got gassy tummies or they’ve got reflux.”

It should also be noted, of course, that if you're seriously concerned about your baby's sleep pattern, you should consult your pediatrician. They can help you figure out if the number of wake ups you're dealing with is typical, or if there's something more serious going on that's disrupting your baby's sleep. If they're simply too stubborn to go to bed, however, acupressure can definitely be worth a shot. As Flores explains, "The worst thing that can happen is you give your baby a massage. Why not give it a try and see how your baby responds?"